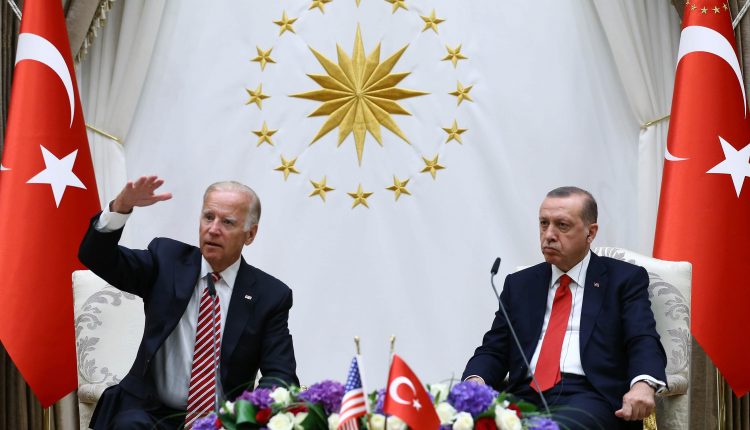 President Donald Trump (L) greets Turkish President Recep Tayyip Erdogan (R) in front of the west wing of the White House on May 16, 2017 in Washington, DC.

Tensions between the US and Turkey have been increasing for some time.

But under the outgoing President Donald Trump, many of the potential hot spots between NATO allies have been smoothed thanks to a friendly relationship between Trump and Turkish President Recep Tayyip Erdogan.

With a Joe Biden government in mind, the possibility exists that some of these tensions will explode – but there is also the possibility of reconciliation. Whatever happens, the next four years for Turkey and its relationship with Washington are likely to be very different from the last four.

“The only thing that held the relationship together in recent years was Trump’s personal relationship with Erdogan,” Michael Rubin, a former Pentagon official and resident researcher at the American Enterprise Institute, told CNBC. “With Trump removed, Erdogan should be very, very concerned.”

This is because there is no shortage of points of conflict between Ankara and Washington. Points showing different attitudes towards geopolitics, alliances and governance.

Turkish President Tayyip Erdogan answers questions during a joint press conference with US President Donald Trump at the White House in Washington, USA, on November 13, 2019.

These include human rights in Turkey, against which the Democrats in particular have spoken out; Turkey’s purchase of the Russian S-400 missile system, which angered NATO allies and nearly sparked US sanctions; and its military action against America’s Kurdish allies in northern Syria and its support for Islamist extremist groups that Ankara argues are not terrorists and are necessary to protect their interests in the region.

There are also Erdogan’s aggressive moves against Greece and Cyprus over gas resources in the Eastern Mediterranean. Turkey’s alleged role in assisting Iran in circumventing US sanctions; and the Incirlik joint air force base, which Turkey houses large numbers of American troops, planes and some 50 of its nuclear warheads – and which Erdogan threatens to cut off if hit by US sanctions.

So that’s a lot. What did Biden say about some of these topics?

Biden and Erdogan are called

Based on his previous statements, it looks like there will be a tougher line from Washington. In an interview last January, Biden called Erdogan an “autocrat”, criticized his actions against the Kurds and said the Turkish leader had to “pay a price”. He also suggested that the US should support Turkish opposition leaders “in order to be able to take over and defeat Erdogan. Not through a coup, but through the electoral process.”

The US would shoot itself in the foot … If Turkey were subjected to severe US sanctions, it would redouble its attempts to deepen its ties with Russia and Iran.

Biden has pledged to recognize the Armenian Genocide, a highly controversial issue for Turkey that US presidents have not recognized for a century. In the midst of the turmoil of World War I, up to 1.5 million Armenian civilians were expelled or killed by the then Ottoman Empire. No Turkish government has ever recognized this as genocide. Turkey and Armenia do not have diplomatic relations.

Both Democratic and Republican lawmakers have supported sanctions against both the Turkish military attacks on the Kurds, which Ankara sees as terrorists, and against the purchase and testing of the Russian S-400 missile defense system. Sanctions would be a devastating blow to the already ailing Turkish economy.

Turkey, for its part, has threatened retaliation for sanctions, including restricting the Americans over the highly strategic Incirlik air base. Erdogan had previously condemned Biden as an “interventionist”.

Nonetheless, Erdogan’s spokesman Ibrahim Kalin said on Wednesday that Turkey believes it could have a “good and positive agenda” with a Biden government, and called any punishment for buying the S-400 “counterproductive”.

Between Russia and a tough place

Both the US and Europe are “increasingly frustrated” with Erdogan’s encouraged foreign intervention and “erratic” behavior toward allies and adversaries, said Agathe Demarais, global forecasting director at the Economist Intelligence Unit.

“This is a dangerous way,” she said. “The new administration in Biden is likely to take a much tougher stance on Turkey than Donald Trump.”

However, this also harbors its own risks for the US: Punishing an ally like Turkey will only push it further into the arms of Russia.

“The US would shoot itself in the foot … if Turkey were to face severe US sanctions, it would redouble its attempts to deepen its ties with Russia and Iran,” Demarais said.

With the second largest military in NATO and strategic access to American operations in the Middle East, Turkey is a partner that many believe the US cannot afford to lose to an adversary.

Not everyone sees a dire future as a foregone conclusion for Washington and Ankara.

Turkey is “mega strategic” for the USA and Europe, emphasized Timothy Ash, Senior Emerging Markets Strategist at Bluebay Asset Management. Because of this, he expects “Biden to work overtime to improve relations with Turkey and bring the country back to the West.”

“I think it’s important to remember that the two biggest risks to the US are China and Russia,” said Ash. “Winning Turkey back from Russia would be a big win for Biden and I think they will focus on that.”

It’s also worth noting that the relationship wasn’t always rosy during Trump’s tenure. In August 2018, Trump threatened sanctions against Turkey for the imprisonment of an American pastor – a threat that pushed the Turkish lira to its then lowest level against the dollar and exacerbated its deepening economic crisis.

With the currency’s record lows, high inflation and worsening unemployment caused by the coronavirus pandemic, clashes with the US, which are imposing risk sanctions, are even more dangerous for the Turkish economy.

Investors and regional analysts will monitor Biden-Erdogan’s momentum over the coming months to see if, according to Turkish academic Ahmed Alioglu, “Turkey should prepare for four years”.