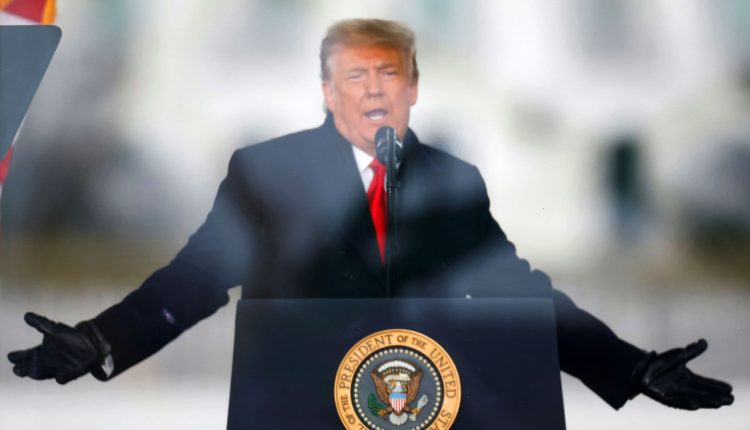 US President Donald Trump gestures during a rally to contest the certification of the results of the 2020 US presidential election by the US Congress on January 6, 2021 in Washington, USA.

As a riot led by supporters of Donald Trump continues on Capitol Hill, the outgoing Republican president tweeted as political leaders asked him to go to the nation to intervene in the violent unrest on Wednesday.

“I ask everyone in the US Capitol to stay peaceful. No violence! Remember, WE are the party for law and order – respect the law and our great men and women in blue. Thank you!” Trump tweeted. “Please support our Capitol Police and Law Enforcement. You really are on our country’s side. Stay peaceful!”

Trump later posted a video urging supporters to leave the riots. “You must go home now. We must have peace,” Trump said as he went on to falsely say that Democratic President-elect Joe Biden’s victory was “fraudulent” because allegations of widespread electoral fraud were exposed.

One person is in critical condition after being shot dead in the U.S. Capitol and at least five people have been rushed to the hospital, DC Ambulance said. At least one of the promoted is a police officer, NBC News reported.

“I urge President Trump to go on national television now, to keep his oath to defend the constitution and to call for an end to this siege,” Biden said in a speech on Wednesday.

The president’s tweets come just hours after Trump held a rally an hour before the start of Congress to confirm Biden’s victory in the electoral college. Trump has continuously sought to reverse the results of the presidential election through unsubstantiated claims of widespread electoral fraud.

“We will never give up, we will never admit,” Trump said to the participants in front of the White House who cheered him on. “We will stop the theft!”

The president’s calls to intervene in the violent uprising were shared by members of his own party and his closest allies.

“The president started this protest. He’s the only one who can stall it,” Trump’s ally and former Republican governor of New Jersey, Chris Christie, told ABC. “What the president said is not good enough. He has to come out and tell his supporters to leave the Capitol grounds and allow Congress to do its business peacefully. Anything else is a waiver of its responsibility.”

“The best @realdonaldtrump can do now is speak to the nation from the Oval Office and condemn the unrest. A peaceful transfer of power is essential for the country and must happen on January 20th,” said Mick Mulvaney of Trump former Acting Chief of Staff of the White House. “Now is the time for the president to be president.”

“Judge this now @realDonaldTrump – you are the only one to hear. For our country!” said Alyssa Farah, a former Trump spokeswoman.

Senate Democratic Chairman Chuck Schumer and House Speaker Nancy Pelosi made a joint statement: “We urge President Trump to demand that all protesters leave the US Capitol and Capitol grounds immediately.”