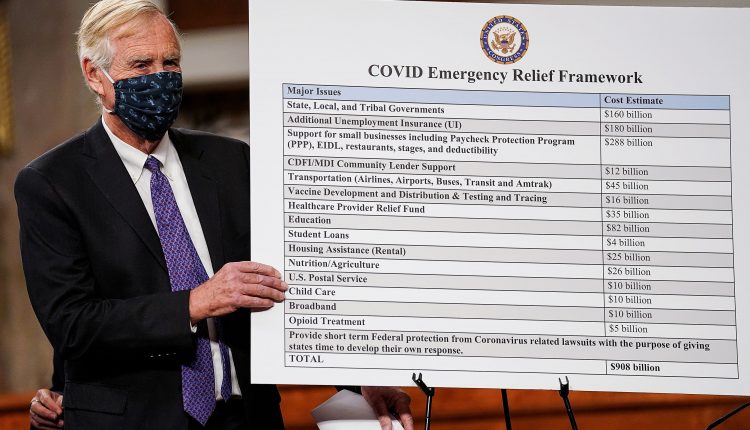 Senator Angus King (I-Maine) holds a table of bipartisan Senate and House members gathering to announce a framework for new laws to fight coronavirus at a press conference on Capitol Hill on December 1, 2020.

Main Street has asked for a new round of federal aid. 83% of small business owners in the recent CNBC | SurveyMonkey Small Business Confidence Survey said they would be supporting a new stimulus package to help individuals and businesses affected by the coronavirus pandemic. On Tuesday, after months of stalled talks between Capitol Hill and the White House and as coronavirus cases hit new highs every day, Congress unveiled a new stimulus proposal that appears to be tailored to the urgent needs of small businesses across the country, though he was quickly shot down by Senate Majority Leader Mitch McConnell.

The pandemic and the paycheck protection program

The PPP provided funds to companies to demonstrate they had maintained their payrolls despite business closings and a general decline in demand earlier this year. Hiring and retaining workers is always a challenge for small business owners, but especially with the pandemic.

In the latest update to the quarterly tracking survey, conducted November 10-17 of more than 2,000 small business owners across the country, about one in five (19%) said they had to take leave or fire some or all of their employees due to the coronavirus . Of those who have taken leave or laid off employees, a majority (58%) have already put some or all of their workers on hold, 23% have not yet expected to reinstate all or some of their workers, and 19% expect these departures will have to be permanent his.

These layoffs have particularly focused on industry. For example, 33% of small business owners in the lodging and catering industries reported having to resort to layoffs and vacations this year, but only 10% of those in the real estate industry reported having to contend with coronavirus-related business setbacks this year.

At the start of the pandemic, policymakers recognized the inherent trade-off between public health and business survival: by encouraging or mandating business closures and by staying home as much as possible to avoid the spread of the novel coronavirus, would they condemn many of these companies to shut down entirely, or at least to be forced to take drastic measures to stay alive, which would likely include layoffs.

Whether it is temporary or permanent, the job losses reported by small business owners are exactly the problem that the PPP should solve.

A simple but elegant solution to a potential unemployment disaster was to pay companies to keep paying their workers even when they weren’t working and even when there was no income. At the individual level, no employee wants to be laid off, and no small business owner wants to reduce the number of employees. At the macro level, policy makers knew that minimizing or avoiding a recession would require a coordinated effort.

The only economic stimulus from Covid-19 that has given small business owners more support than the general public is the Paycheck Protection Program, which has allowed Main Street to continue paying salaries to workers on leave during the shutdown.

Public support for a new stimulus package is similar: 89% of non-small business owners across the country support a new stimulus package. The most popular proposal is the simplest: direct payments to individuals supported by half of small business owners (50%) and the majority of the population (54%). The package announced on Tuesday does not include funding for this particular proposal.

Despite the overwhelming public and small business support, congressional business talks had stalled since late summer, largely due to partisanship.

The CNBC | SurveyMonkey Small Business Survey for Q4 2020 has broad support for another round of Covid-19 incentives and relatively high support from small business owners from both political parties for more funding for the Paycheck Protection Program.

Only 23% of small business owners expect their workforce to grow in the next 12 months, up from 32% a year ago and in the first quarter of this year. Support for a revitalized PPP among small business owners shows that they believe it will bring the economic recovery needed to get back to where they were before the pandemic.

The CNBC | SurveyMonkey Small Business Survey for the fourth quarter of 2020 was conducted by more than 2,200 small business owners between November 10 and November 10. 17. The survey will be conducted quarterly through the SurveyMonkey online platform and will be based on the survey methodology.