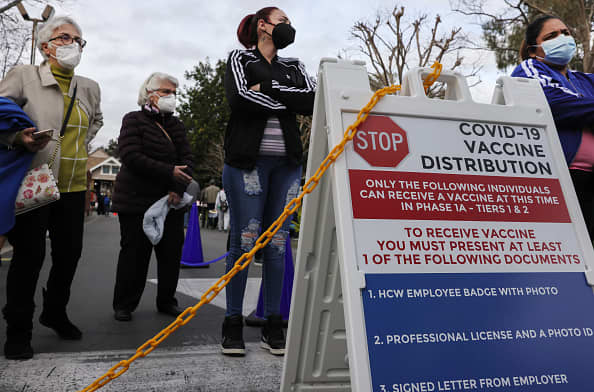 People wait outside a COVID-19 vaccine distribution center at the Kedren Community Health Center on January 28, 2021 in Los Angeles, California.

Along with other initiatives such as government-sponsored mass vaccination centers and mobile clinics, the new program aims to ensure fair adoption of the vaccine, said Zients.

“Justice is at the core of our strategy to move out of this pandemic, and justice means reaching out to everyone, especially those in underserved and rural communities,” Zients said. “But we cannot do this effectively at the federal level without our partners at the state and local levels sharing the same commitment to justice.”

“Two-thirds of their patients live at or below the federal poverty line, and 60% of patients in community health centers identify as racial or ethnic minorities,” she noted. “Justice is our north star here. These efforts, which focus on direct referral to community health centers, are really about connecting with hard-to-reach populations across the country.”

When the program launches, the White House plans to send cans to at least one center in each state, with 1 million split between 250 centers over the coming weeks, Nunez-Smith said. She noted that the government is also working to increase public confidence in vaccines, “which we know are lower than the national average in underserved communities”.

The community health center program will be announced after the launch of the retail pharmacy program, where the federal government will begin shipping cans directly to a few hundred pharmacies across the country. Nunez-Smith said the Centers for Disease Control and Prevention are working with participating pharmacy companies to ensure they reach “socially vulnerable areas”.

The government also announced that it will again increase the number of doses it sends to states each week. The federal government will now ship 11 million cans to states every week, up from the 8.6 million it sent three weeks ago, Zients said.

“That’s a 28% increase in vaccine delivery in the first three weeks,” he said.

When asked whether there is an inevitable trade-off between equity and speed of vaccine distribution, Zients said, “I do not accept that premise at all.”

“I think we can do this in a fair, equitable and efficient way,” he said. “Efficiency and equity are central to both of us and I don’t see any compromise between the two. I think they go hand in hand.”