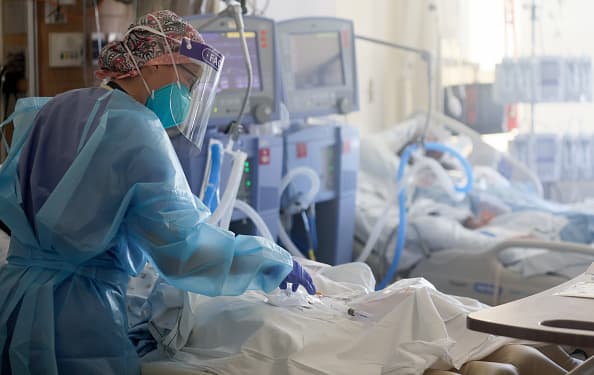 LONDON – Health experts have warned that despite restrictions, the US is likely to struggle to contain the spread of a highly infectious variant of coronavirus, underscoring the importance of taking aggressive action immediately to protect as many people as possible.

The variant, which was first discovered in the UK and known as B.1.1.7, has an unusually high number of mutations and is associated with more efficient and faster transmission.

There is no evidence that the mutant strain is associated with more severe disease outcomes. However, because it is more transmissible, more people are likely to be infected, which can lead to a higher number of serious infections and further deaths.

Scientists first discovered this mutated strain of the virus in September. The worrying variant has since been detected in at least 44 countries, including the US, which has reported its presence in 12 states.

Last week, the US Centers for Disease Control and Prevention warned that the US variant’s modeled trajectory “is growing rapidly in early 2021 and will become the predominant variant in March”.

The forecast suggests Britain, which has seen the strain grow exponentially in the months since its discovery, will struggle to control its effects.

How is the situation in the UK?

British Prime Minister Boris Johnson announced lockdown measures in England on January 5th, ordering people to “stay at home” as most schools, bars and restaurants had to close. Scotland, Wales and Northern Ireland all have similar measures in place.

The restrictions, which are expected to remain in England through at least mid-February, were put in place to ease the burden on already stressed hospitals in the country amid the surge in Covid admissions.

Government figures released on Thursday said the UK had 37,892 new Covid cases with 1,290 deaths. A day earlier, the UK saw a record high in Covid deaths when data showed an additional 1,820 people had died within 28 days of a positive Covid test.

Dr. Deepti Gurdasani, clinical epidemiologist at Queen Mary University in London, stressed that the UK response suggests that the variant will spread rapidly geographically and increase its incidence if aggressive measures are not taken immediately to curb the spread of the virus in places where it has established itself in the community. “

Gurdasani cited results of a closely watched study conducted by researchers at Imperial College London that showed “no signs of a decrease” in Covid rates between January 6-15, despite England being locked, “suggesting that This is also the case with restrictions, and because of the higher transferability it is difficult to contain this effectively. “

Researchers in the study, published Thursday, warned that if the prevalence of the virus in the community were not significantly reduced, the UK healthcare system would remain under “extreme pressure” and the cumulative number of deaths would rise rapidly.

“All of this means that the window of opportunity for containment is very short. Given the lower level of active surveillance in the US, the variant may have spread more widely than expected and containment policy must reflect this,” Gurdasani said.

“This means strict containment efforts not just where the variant has been identified, but in all regions where it could have spread. And active surveillance with contact tracing to identify all possible cases, while maintaining strict restrictions to chains of transmission interrupt. “

Patients arrive in ambulances at the Royal London Hospital in London on January 5, 2021. The British Prime Minister made a national televised address on Monday evening, announcing that England would take action against the Covid-19 pandemic for the third time. This week, the UK recorded more than 50,000 new confirmed Covid cases for the seventh straight day.

To date, the UK has had the fifth highest number of confirmed Covid infections and related deaths in the world.

What measures should be considered in the US?

On his second day in office, President Joe Biden announced comprehensive measures to combat the virus, including the establishment of a Covid testing committee to improve testing, address supply shortages and provide direct funding to hard-hit minority communities.

Biden said the executive orders said, “Help is on the way.” He also warned it would take months “to reverse this”.

“The key to all of this is reducing human interactions, and the strategy must be broadly the same as it was before, what has worked elsewhere and much more,” said Dr. Simon Clarke, an associate professor of cell microbiology at the University of Reading, told CNBC over the phone.

Clarke said the U.S. states, for example, need to consider reducing the number of people in retail or recreational settings, and it might be necessary to close bars or limit their opening hours, as studies show that the risk of transmission is higher indoors is.

“None of these things we do to protect ourselves eliminate the risk, none of them make us Covid safe – all it does is reduce the chances of getting infected,” said Clarke.

“The virus has just pushed this back with this evolutionary step, and it will now be even more difficult to achieve the same level of protection.”

Introduce vaccines “as soon as possible”

“Everyone wants to believe that vaccines are the solution, and they’re going to make a huge difference, but it’s not the whole solution,” said Dr. Kit Yates, lecturer in mathematical biology at the University of Bath and author of “The Mathematics of Life and Death,” told CNBC over the phone.

Yates said the new US administration should do everything possible to introduce Covid vaccines “as soon as possible” to ease pressure on health facilities, but insisted that this should be part of a multi-faceted approach.

Some other measures U.S. states should consider, according to Yates: encouraging people to work from home if possible, physical distancing, improving ventilation in school, encouraging children to wear masks, giving financial support to these self-isolating and effective testing and tracing protocols.

“These are the boring, terrible, non-pharmaceutical measures that nobody wants, but the alternative is just too scary to think about.”