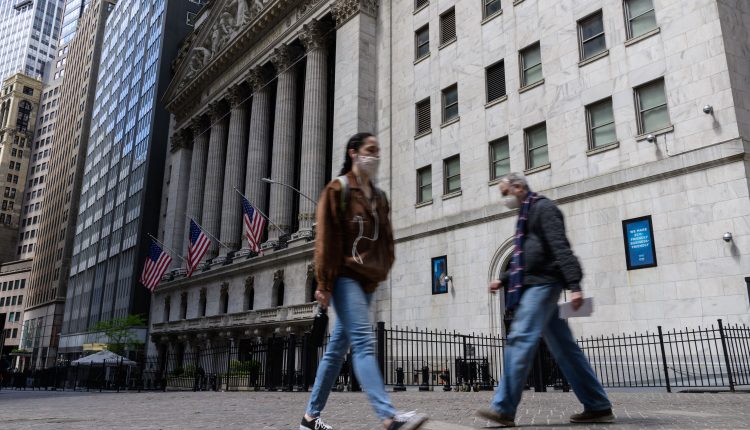 1. The stock jump in the late week gushes on Monday before the market

People walk past the New York Stock Exchange on Wall Street on May 10, 2021 in New York City.

US stock futures fell on Monday after Friday’s strong rally. However, Friday’s gains of more than 1% for the Dow Jones Industrial Average and S&P 500 and over 2% for the Nasdaq were not enough to offset the sharp declines early last week. The Dow and S&P 500 both saw more than 1% weekly declines, while the Nasdaq fell over 2% on its worst weekly performances since February. The roller coaster ride on inflation concerns hit stocks early last week. The Dow was down 3.4%, the S&P 500 was down 4% and the Nasdaq was down 5%. All three stock benchmarks made up some of those Thursday and Friday losses.

Bond yields were mostly lower on Monday after 10-year government bond yields rose to over 1.7% on Wednesday during last week’s worst stock sale. This was the highest 10-year return level in more than a month after a 14-month high in March. Fears of inflation and whether the Federal Reserve will be able to keep the promised line with interest rates close to 0% and massive asset purchases rocked the markets. On Wednesday, the government reported that consumer prices accelerated at their fastest pace in more than 12 years in April as the US economic recovery kicked off. The Fed released minutes of its April meeting on Wednesday.

AT&T on Monday announced a deal to combine its WarnerMedia movie and media content division with Discovery, which will pave the way for one of Hollywood’s biggest power players to better compete with streaming media giants like Netflix and Disney. AT&T shares rose 4% and Discovery rose 21%. AT&T shareholders would own 71% of the new company. Discovery shareholders would own 29%. The transaction would assemble properties like CNN, HBO and Warner Bros. from WarnerMedia, as well as the HGTV, TLC and History channels from Discovery. In 2018, AT&T acquired Time Warner, since then renamed WarnerMedia, for an equity value of $ 85 billion.

4. Elon Musk clarifies that Tesla did not sell Bitcoin.

Elon Musk, CEO of Tesla, stated in a tweet early Monday that the electric vehicle maker “did not sell Bitcoin”.

Bitcoin partially rebounded on Monday, trading above $ 45,000 per unit. The price of the world’s largest cryptocurrency fell below that level on Sunday after Musk apparently hinted on a Twitter exchange that Tesla might or might not sell the rest of its Bitcoin holdings. He “actually” replied to a sympathetic tweet.

All of this happened days after Musk said Tesla planned to hold onto its Bitcoin even though it stopped using it to buy electric cars until Bitcoin mining can become more energetically sustainable.

People enjoying the sunshine on the steps of the MET in New York City as the CDC lifts restrictions on wearing masks for those who are fully vaccinated.

CDC director Dr. Rochelle Walensky urged people to be honest and only drop their Covid masks if they are fully vaccinated. The sudden change in CDC guidelines over the past week has left some people confused as it is not overriding local mask regulations. Local governments and businesses are grappling with the question of whether to follow the CDC’s new guidelines. Starbucks said, “Facials will be optional for vaccinated customers starting Monday, May 17, unless local regulations require it by law.” Walmart and Costco led the way on Friday. However, other retailers like Target and Gap will keep the pandemic logs for the time being.

– Follow all market action like a pro on CNBC Pro. With CNBC’s coronavirus coverage, you’ll get the latest information on the pandemic.