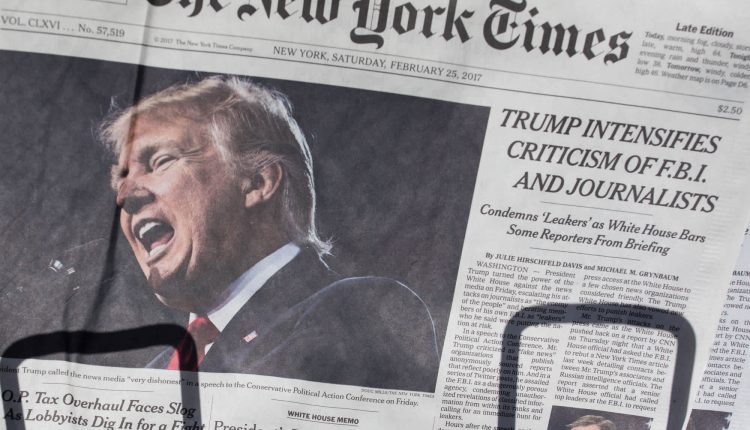 A judge on Tuesday dismissed a former President Donald Trump’s campaign suit accusing the New York Times of defaming them with a 2019 column of opinion arguing that there was a “quid pro quo” between the campaign and Russia in 2016.

It was alleged that the Times made false and defamatory claims under the headline “The Real Trump-Russia Quid Pro Quo” with the “intentional purpose” of undermining Trump’s re-election opportunities last year.

But d’Auguste, in a three-page judgment, quickly described the fatal flaws in the lawsuit that prompted him to drop the case at the newspaper’s request.

The judge wrote that Frankel’s column was a legally protected opinion and that the lawsuit could not prove that Frankel wrote his column with “actual malice”.

And, said d’Auguste, there is no way the campaign has legal authority to bring the lawsuit.

However, the judge denied a Times motion to impose fines on the campaign for the lawsuit.

David McCraw, Senior Vice President and Assistant General Counsel of the Times, said: “The court today made a fundamental point regarding freedom of the press clear: We should not tolerate defamation lawsuits brought by those in power who intend to silence those and intimidate those who test them. ” They.”

“We are delighted that the court has delivered this message powerfully,” said McCraw.

Charles Harder, the attorney who represented the Trump campaign in the lawsuit, and Jason Miller, a spokesman for the former president, did not immediately respond to requests for comment on the dismissal.

Harder had also represented the campaign in a similar defamation lawsuit against CNN for a 2019 statement related to Russia’s election nuisance. A federal judge dismissed that lawsuit in November, ruling that the campaign’s claim that CNN acted maliciously was implausible.

A third defamation suit, which Harder filed for the campaign against the Washington Post via two 2019 opinion articles on the campaign allegedly benefiting from Russian aid, is pending in federal court in Washington.

In the first paragraph of his Times, Frankel wrote: “There was no need for a detailed electoral collusion between the Trump campaign and Vladimir Putin’s oligarchy because they had an overarching deal: helping in the campaign against Hillary Clinton for the quo of a new pro -Russian foreign policy, starting with the relief from onerous economic sanctions by the Obama administration. “

The column was published when then Special Adviser Robert Mueller was investigating possible coordination between the campaign and Russia, whose agents hacked and published emails from the campaign manager of Democratic presidential candidate Clinton and the Democratic National Committee in 2016.

In a report released shortly after the statement, Müller said there was insufficient evidence to conclude that Trump’s campaign was “coordinated or conspired with the Russian government in its electoral lobbying activities.”

However, the special adviser also noted that the campaign “welcomed” the potential to damage Clinton’s campaign resulting from the publication of emails stolen by Russian agents, noting that Trump had said at a rally He “hoped Russia would recover emails described missing from a private server Clinton used as Secretary of State.”

D’Auguste said in his decision to dismiss the campaign’s lawsuit that the opinion was an “unworkable opinion”.

“And the overall context in which the article was published in the opinion section of the newspaper signaled to the reader that ‘the broader social context and surrounding circumstances [indicate] What is read … is likely an opinion, not a fact, “wrote d’Auguste, quoting a federal appeals court that had ruled another lawsuit against the Times.

The judge also said that the lawsuit should be dismissed because the statements challenged by the campaign are not “by and relating to” the plaintiff – the campaign itself – “which is a necessary element of a defamation measure”.

“A company has no authority to sue statements that affect employees or affiliates of a company, but not the company itself,” wrote d’Auguste.

“Here the focus of Mr. Frankel’s column was on the former president’s staff and family members, not the Trump campaign itself.”

Even if Frankel’s comments were legally contestable as allegations of fact, and if those allegations concerned the Trump campaign, “the complaint does not allege facts sufficient to support a requirement that the Times publish the alleged statements with actual malice,” the judge wrote .

“In this regard, bias or ulterior motive does not constitute real malice,” wrote d’Auguste.