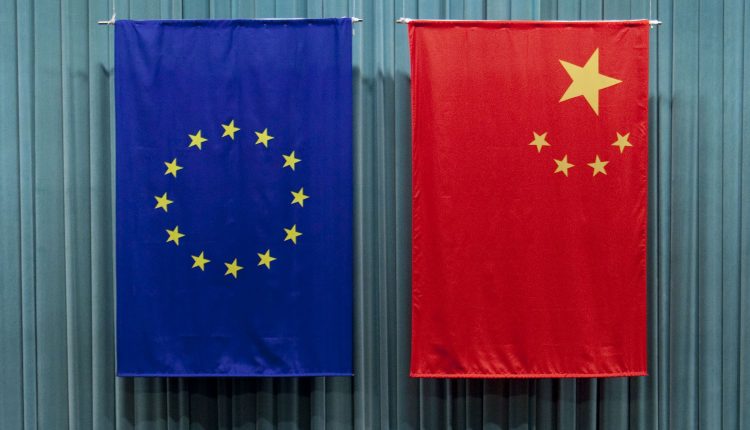 Retaliation between the EU and China may jeopardize new funding offers

Flags of the European Union (left) and China.

Heightened tensions between the European Union and China could jeopardize an investment deal recently negotiated by both sides.

The EU on Monday imposed sanctions on four Chinese officials and one facility for human rights abuses in northwest China’s Xinjiang region. The move was part of a coordinated action by the US and its allies, including Britain and Canada, against Beijing.

China quickly retaliated against the EU and announced its own blacklist of 10 people – including the European legislature – and four entities.

Beijing’s reaction in turn led to warnings from several members of the European Parliament or MEPs that they would not ratify the EU-China investment agreement signed in December.

“Lifting the sanctions against MPs is a prerequisite for starting talks with the Chinese government on the investment agreement,” said Kathleen van Brempt, a MEP from the left-wing Socialists and Democrats group.

With 145 MEPs, S&D is the second largest political grouping in the European Parliament.

Those affected by the Chinese sanctions also weighed in.

Reinhard Bütikofer, a German MEP, said in a Twitter post that the ratification of the EU-China agreement “does not become any more likely” after Beijing imposed sanctions to “punish” freedom of expression.

Bütikofer is the legislator of the Greens / European Free Alliance and chairman of the European Parliament delegation to China.

Meanwhile, Slovak MEP Miriam Lexmann of the center-right group of the European People’s Party said in a tweet that China’s actions “will make it clear that it is not interested in being a partner but a systematic rival, the fundamental one Undermines values ​​and principles “.

The European Parliament is due to vote on the EU-China investment deal in early 2022, S&D said. Negotiations lasted seven years and the deal, if ratified, would give European investors “unprecedented access” to the Chinese market, said the President of the European Commission, Ursula von der Leyen, in December.

But even before Monday’s retaliation, some European lawmakers voiced three major concerns about the deal and questioned it being passed.

The Mandarin-language statement released on Tuesday said EU sanctions against China are based on “lies and disinformation” about Xinjiang, according to a CNBC translation. She also warned the EU against further deteriorating relations between Europe and China.

Human rights groups such as Amnesty International and international organizations, including the United Nations, have accused China of detaining more than 1 million Uighur Muslims and other minorities in detention centers.

In a joint statement released on Monday, the US Secretary of State and the Foreign Ministers of Canada and the United Kingdom claimed: “China’s extensive program of repression includes severe restrictions on religious freedom, the use of forced labor and mass detention in internment camps. Forced sterilization and the concerted destruction of the Uighur heritage.”

– CNBC’s Evelyn Cheng and Silvia Amaro contributed to this report.