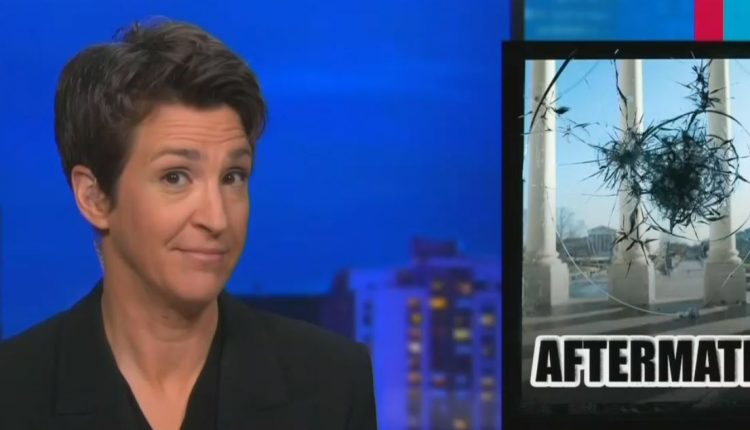 Rachel Maddow provoked the racism behind Senator Ron Johnson’s claims that the Trump terrorists who attacked the Capitol were good people.

Rachel Maddow said, “Ron Johnson spoke tonight about why he wasn’t scared at all during the attack because he could tell by their eyes that they were all good people who would never break the law.”

Maddow played a clip of Sen. Johnson in which he said, “I am also being criticized for commenting on Jan. 6 that I never felt threatened. Because I didn’t. Mainly because I knew that even though these thousands of people who had marched into the Capitol were trying to pressure people like me to vote the way they wanted me to choose, I knew they were this country love, really respect law enforcement, and would never do anything to break a law so i wasn’t worried. If the tables had been turned, Joe, that got me into trouble, if President Trump had won the election and tens of thousands of Black Lives Matter and Antifa protesters, I might have been a little worried. “

The MSNBC host replied, “I might have been a little concerned. If they were black it would have been one thing, but these were white men convicted of criminals and members of large white supremacist prison gangs who attacked the officers and tried to kill the vice president. But look how know how can I feel scared? Did you see how white these men were? If they had been black – God bless you Senator Ron Johnson. “

More people in the media need to say exactly what Maddow said. Republicans must be called to their racist defense of the Trump terrorists. Whenever a Republican mentions Black Lives Matter when asked about the attack on the Capitol, he must be asked why he is bringing up races and how many Black Lives Matter protesters have tried to overthrow the government?

Maddow did it. Republicans defend domestic terrorism and sedition with racism, and they must be encouraged to do so.

Tesla makes use of prospects to check AV know-how on public roads: NTSB