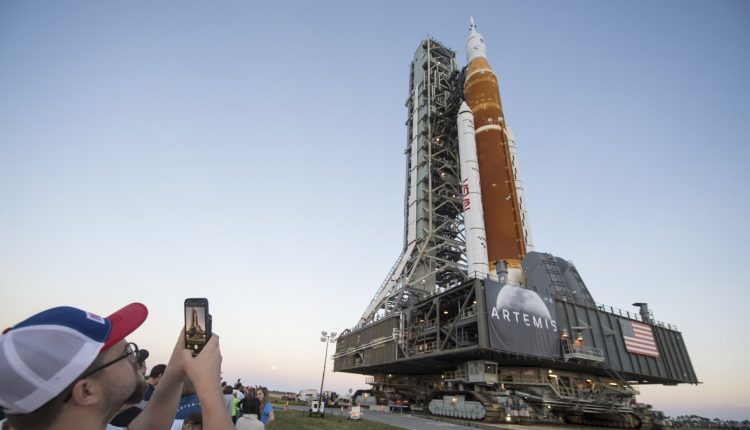 NASA postpones Artemis 1 rocket launch because of points throughout countdown

In this handout provided by the National Aeronautics and Space Administration, the Space Launch Systemrocket with the Orion spacecraft aboard atop a mobile launcher as it rolls out of High Bay 3 of the Vehicle Assembly Building for the first time on its way to Launch Complex 39B March 17, 2022 at Kennedy Space Center, Florida.

CAPE CANAVERAL, Florida – NASA postponed its Artemis I launch Monday after issues arose during countdown, delaying the debut of its towering rocket and its long-awaited mission to the moon.

The agency was slated to launch its Artemis I mission from the Kennedy Space Center during a two-hour launch window that opened at 8:33 am ET, sending the Space Launch System (SLS) rocket and Orion capsule on a more than monthlong journey around the moon

But NASA was unable to resolve a temperature problem identified with one of the four liquid-fueled engines, discovered with under two hours to go in the countdown.

In a blog post, NASA said its “engineers are looking at options to gather as much data as possible.”

“The Artemis I rocket and spacecraft are in a stable, safe condition,” the agency said.

NASA on Monday also found a hydrogen leak in the engines and a crack in the thermal protection system material that protects the core of the rocket — though those issues were resolved before the planned launch window.

NASA has backup launch dates scheduled for Sept. 2 and Sept. 5, although whether the issues will be resolved before then is yet unknown. NASA said a news conference will be held early Monday afternoon to discuss the postponement and next steps for Artemis I.

The uncrewed launch marks the debut of the most powerful rocket ever assembled and kicks off NASA’s long-awaited return to the moon’s surface. It’s the first mission in NASA’s Artemis lunar program, which is expected to land the agency’s astronauts on the moon by its third mission in 2025.

While Artemis I will not carry astronauts, nor land on the moon, the mission is critical to demonstrating that NASA’s monster rocket and deep space capsule can deliver on their promised abilities. Artemis I has been delayed for years, with the program running billions over budget.

This story is developing. Please check back for updates.