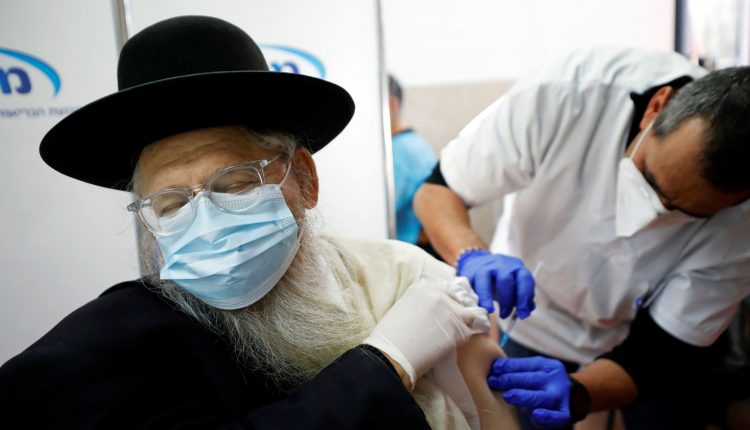 Israel Says It Has Vaccinated 7% of Its Inhabitants, In The US It Is Much less Than 1%

An ultra-Orthodox Jewish man receives a vaccination against coronavirus disease (COVID-19) as Israel continues its national vaccination campaign during a third national COVID lockdown at a Maccabi Healthcare Services office in Ashdod, Israel, on December 29, 2020.

Israel has already vaccinated around 647,000 people against Covid-19, a whopping 7% of its 9.2 million population – more than any other country in the world, according to the Israeli Ministry of Health.

The Ministry of Health said it vaccinated more people than infected total in the first nine days of its campaign. According to the Johns Hopkins University, around 420,000 Covid-19 infections have been confirmed in Israel since the beginning of the pandemic.

“We are ahead of the world when it comes to bringing and giving vaccines. Israel is the world champion in vaccines, in the first place,” said Israeli Prime Minister Benjamin Netanyahu on Tuesday. “My mission now is to make sure that we continue at this pace and work on it together.”

In contrast, the United States vaccinated around 0.8% of its 331 million residents against Covid-19 on Wednesday, according to the Centers for Disease Control and Prevention. However, the agency warns that the number may lag behind actual vaccinations as states report the data. Still, federal officials have recognized in recent days that the rollout has been slower than desired.

While Israel’s population of nearly 9.3 million is only marginally larger than New Jersey’s, the nation’s success in rapidly introducing first doses to a large segment of its population could teach countries like the United States lesson

Dr. Jonathan Reiner, a professor of medicine and surgery at George Washington University’s School of Medicine and Health, pointed out Israel as a potential model for the world on Thursday.

Israel’s main advantage is the centralized health system, said Eran Segal, a computer biologist at the Weizmann Institute of Science in Rehovot, Israel. Segal has been closely monitoring Israel’s Covid-19 response since the pandemic began.

“As someone who has lived in the US for about a decade, I know that the US is much more dispersed. There are probably thousands of organizations,” he said in a telephone interview.

Segal noted that Israel, in contrast, also has a simplified insurance system with only four health organizations, or HMOs. Segal noted that the Israeli health system is highly digital and everyone over 18 is required by law to register with one of the four HMOs. He added that the Israeli government had coordinated well with the HMOs and local officials, and had called in the army doctors to help if needed.

In the US, the early days of the rollout were marked by confusion among governors and civil servants about how many doses each state received. Eventually, General Gustave Perna, who oversees the logistics for President Donald Trump’s Operation Warp Speed ​​vaccination program, took the blame for the miscommunication.

While the distribution has been smoother since then, states are administering shots more slowly than expected. Dr. Leana Wen, former Baltimore health commissioner, said it was not clear what is slowing the process. She noted that the federal government could help states set up additional additional vaccination centers.

Segal said Israel had set up field clinics to distribute the vaccine. The Israeli Ministry of Health announced on Monday that the country will open 150 so-called vaccination complexes.

Israeli Health Minister Yoel Edelstein said in a statement this week that Israel will be the first country in the world to repackage doses of the vaccine in more portable containers so the country can move the vaccines outside of hospitals and into more accessible clinics. “That way, we can get anywhere in the country without losing valuable vaccines, and Israel will be the world leader in vaccinations,” said Edelstein.

In the United States, most vaccinations are given in hospitals or medical centers where health care workers are given their first doses. Recently, some outpatient emergency centers have also started vaccinating their staff.

CVS Health, Walgreens, and other pharmacy chains have also partnered with the federal government to distribute admissions to residents of long-term care facilities, though the Centers for Disease Control and Prevention say the program is not yet fully operational. The U.S. has signed contracts with pharmacy chains to deliver the vaccines at retail locations across the country once the program expands to members of the general public. However, the program has not yet started.

“This will be the greatest operational challenge that we as a nation have ever faced,” he said at a press conference earlier this week. “We’ll get there. It’s going to take a tremendous new effort. It’s not underway yet.”