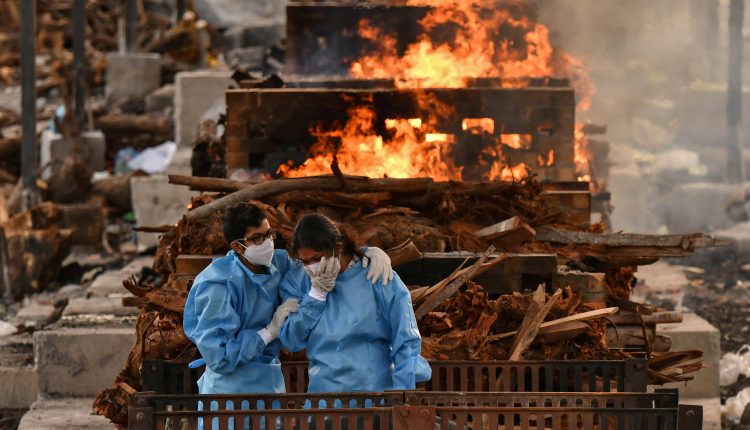 Individuals use social media to seek out hospitals and medicines

A healthcare worker wearing personal protective equipment (PPE) looks after a Covid-19 patient at a Covid-19 care center set up in the Shehnai Banquet Hall and at Lok Nayak Jai Prakash Narayan Hospital (LNJP ), one of the largest COVID-19 institutions.

As India’s devastating second wave of the coronavirus outbreak overwhelmed the healthcare system, desperate users turned to social media to seek help from the public as hospital beds and oxygen supplies became scarce.

People who need help for themselves or their relatives have made inquiries on websites like Twitter, Facebook, WhatsApp, and Instagram. Others gathered information about hospital bed availability, as well as contact details for oxygen cylinder providers and other scarce resources. In many cases, the efforts have helped save lives.

“But social media also has the potential to bring people together,” he said, explaining why it is important to fight for the right kind of incentive-based system design and algorithmic accountability when it comes to social media.

“I think this Covid disaster, which continues in India, shows the promise that social media can be used as a tool for organizing relief supplies and calling for greater political accountability at all levels – from our health officials to decision-makers who Set budgets, “said Gupta.

Social media cannot replace the core responsibility of the state to help citizens in times of crisis.

Strangers banded together to help each other through the unprecedented crisis.

Volunteers have gathered up-to-date information in Google Sheets, which is widely shared on social platforms.

Some have set up websites to track vaccine availability while others have created apps that generate Twitter search links that users can use to find Covid-19 resources in their cities. Many people also volunteered to prepare homemade meals for patients who were quarantined at home while others offered help with tasks such as grocery shopping.

For its part, Twitter has added a Covid-19 resource page to improve the visibility of information.

Social media influencers, celebrities, and politicians also participated in the crowdsourcing effort. Some of them helped organize beds and oxygen bottles as India’s daily caseload rose in April and early May.

Although Twitter has become the most visible social media platform in India’s crowdsourcing efforts due to its ability to amplify inquiries and tag influencers and politicians, Gupta said other platforms have been used extensively as well.

He said volunteers also came together in WhatsApp groups to focus on more detailed communities like housing associations and alumni groups. Gen-Z – or those born between 1996 and early 2010 – and younger millennials turned to Instagram, he said.

Daily cases in India have peaked at more than 414,000 new infections per day, which was reached on May 7th. However, experts say the virus is spreading in rural India, where health infrastructure is not prepared for unexpected surges.

On Twitter, which has a greater impact in the urban centers of India compared to rural areas, users have already started gathering resources and initiatives to respond to the outbreak in India’s countryside.

Deficiencies in the Indian health system

Bisen added that in this case, social media is the only option for many as the other media are lacking – this only poorly reflects how central and state governments are struggling to cope with the Covid-19 crisis, he said .

“The state often has to deal with disasters and ensure that it communicates and comforts the citizens, that the state is watching their backs, which it has not done here,” Bisen said. He added that social media “is always a complementary medium and can never be the main driver in managing disasters”.

Gupta of the Internet Freedom Foundation said some of the volunteers had been threatened by the authorities for their informal and legal efforts.

Local media reported last month that some Covid-19 aid groups that provided hospital beds and oxygen information through messaging apps like WhatsApp, Discord and Telegram had been disbanded, while some online resource trackers were deleted.

Volunteers complained about police threats demanding their closure – but police have denied making such demands. In Uttar Pradesh, the BBC reported that police had charged a man who tried to use Twitter to find oxygen for his dying grandfather.

The Supreme Court of India reportedly said there should be no crackdown when people voice their complaints on issues such as lack of oxygen and others on social platforms. This came after the federal government, under new regulations, ordered social platforms to cut jobs that were critical to dealing with the pandemic, according to the New York Times.

Another unfortunate outcome, according to Gupta, was the proliferation of a black market in resources where malicious actors on social media cheated on vulnerable people.

“While social media – Twitter in particular – has broadly mitigated the harmful effects of the current wave, I would say that it has actually saved lives, it has also shown that there is very little tolerance for opinion and expression Freedom of expression exists, “he said.

Additionally, “there are law and order issues that always arise due to social interaction … and certain participants may use them maliciously,” he added.

Gupta added that the efforts of the volunteer groups continue to this day, but state services have also caught up to some extent.