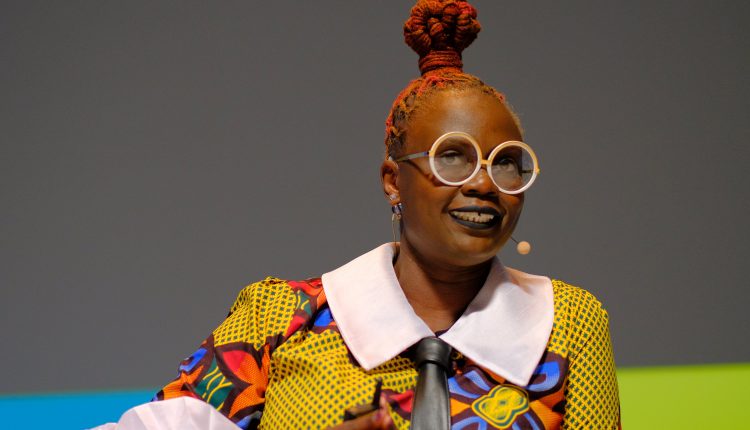 Caroline Wanga on stage at the Cannes Lions 2019 in Cannes, France.

That’s why she stepped back from around 15 years of hard work at Target in 2020 to overcome a new obstacle: helping a half-century-old black media brand reinvent itself.

When Wanga joined Essence in June, the mainstay of black culture was a little less than two years away from a buyout from African American entrepreneur Richelieu Dennis, founder of Sundial Brands, a beauty company now part of Unilever and products for black consumers manufactures. After nearly two decades in the possession of Time Inc., it was back in black ownership for an Essence amid impersonation.

It was the perfect project for Wanga, who is easily bored with the status quo and says she works best when things “fall off the rails”.

“I like to address the problem when the fires are there,” says Wanga. “Throw me in when things are impossible and it’s the end of the world.”

Over the course of her decades of career, Wanga has overcome boundaries and worked her way up from an intern to positions such as Vice President of Human Resources and Chief Culture, Diversity and Inclusion Officer at Target. As a black woman, a single mother at 17 and a Kenyan immigrant, Wanga does not allow herself to be defined by stereotypes. Now she heads one of the largest media companies in the world targeting underrepresented communities and she leads with authenticity.

Wanga is a self-described oversharer and takes pride in being open to her employees without apology so that they can feel welcome. She says her approach to leadership and life helped overcome negativity and thrive in American business, and she has several lessons to offer just now.

Wanga started at Target in the “most unstrategic way”.

After getting pregnant at the age of 17, she dropped out of college to raise her daughter Cadence. It was the first major disruption in her life, especially problematic for her parents, who both have PhDs, but it was far from a life-changing setback.

“This particular moment is the theme of my life in a very interesting way,” says Wanga. “After that happened, I was outraged that this would not end my plan for success.”

Back home in Minnesota, Wanga, who had moved to the United States as a tween from Kenya, tried several hybrid school programs before quitting a range of jobs in the nonprofit sector. In 2003, at the age of 25, she enrolled in a business program at Texas College.

“The barrier to graduation wasn’t the program,” says Wanga. “It was my life. I had this little girl and I didn’t want to ask for help because I’ll prove that I can do it on my own.”

2. Set a goal, be flexible on the path

When she joined Target in 2005 after a career fair, Wanga said she wasn’t passionate about improving supply chains or thinking about the end goal. It paid off well and she didn’t have to worry about her daughter. During her time at Target, Wanga switched roles and worked her way up the staff chain from an intern at the distribution center. But HR was one way Wanga admits she never thought she would take it.

She eventually targeted the director for diversity and inclusion. One position she jokes is “closest to the soul in Corporate America”.

Wanga planned to achieve this by 2018, but she skipped her mission years ahead of schedule and worked her way up to become Chief Diversity and Inclusion Officer by 2015. Your lesson: agree on the goal, negotiate the way to get there.

If I had waited to define the job I wanted and waited for the perfect job, I would still be an intern.

When Wanga joined Essence as Chief Growth Officer in June 2020, she saw it as an opportunity to give back to an institution that is essential to her identity and that of many other black women. By this point, Wanga had reached a crossroads at Target and was looking for the next project to add to her portfolio.

It was a new brand, a new job, and while it’s difficult to move away from Target, Wanga cites “the next role I didn’t know I wanted”.

Within a month, Wanga was promoted to Essence’s interim chief executive officer before assuming the full-time CEO title this February.

“You don’t have to have all the answers, the path can be different,” says Wanga. “If I had waited to define the job I wanted and waited for the perfect job, I would still be an intern.”

3. Your story is just as important as the business strategy

Over the years, Wanga says authenticity is one of the biggest drivers of their success. Wanga, often known for sharing her personal life experiences, told the CNBC Inclusion in Action forum last September that this is a prerequisite for being a good leader. Telling the story of who you are is just as important as explaining the strategy of the company you run.

“Because at the end of the day … you have to model what you say to experience and you have to be ready to go first,” says Wanga. “On the one hand, you can’t talk about authenticity and you want inclusion and representation in your group … and then people just know that you are the CEO who shows up at team meetings.”

Working with a new team, Wanga shares a list of 20 slides that she calls her “Dimensions of Difference”. They cover everything from who she is, where she comes from, what her family looks like, until she is D + Christian and has diabetes.

“She brings her authentic self into her work,” says Minda Harts, author of “The Memo: What women with color need to know in order to secure a place at the table.”

“From the outside, it has not adapted to the status quo, but changed the norms for the appearance of leadership,” adds Harts.

Over the years, Wanga developed relationships with influential allies who supported her when others persuaded her. But you can’t just take a job, stand in for yourself, and try to make change without first establishing yourself.

To influence the American company, Wanga needs to “do your job really well” and develop relationships with supervisors, colleagues and key business partners who vouch for you. Only then can you offer your perspective.

“What happens wrong with a lot of people who look like me,” she says, “when ideas are rejected in the workplace is that” it is rejected because it is not good, but because no one knows if you are doing your job doing really well, “says Wanga.

5. If you can’t be who you are, go elsewhere

According to a study by McKinsey and Lean In, black women are generally slower promoted than other groups of employees and are underrepresented in leadership positions. Many black women also say their managers are less likely to stand up for them, and 42% say they are uncomfortable sharing their thoughts on racial inequalities. Compared to all women, they are twice as likely to say that they cannot be all their selves at work.

While Wanga preaches authenticity and is always up to a challenge, she also says if you can’t be who you are, where you are, go elsewhere. Many of their colleagues tire of changing an institution that is unwilling to change or do work.

“You don’t have to be in a place that doesn’t respect who you are,” says Wanga. “If we go away, they’ll fix it.”

When it comes to corporate representation of women and minorities in America, the numbers are disappointing. According to the McKinsey Lean-In report, for every 100 men promoted, only 85 women receive a promotion. These gaps are larger for minorities: only 58 black women and 71 Latin Americans achieve a promotion for every 100 men. At the beginning of 2020 women held only 38% of management positions, men 62%.

Companies that fail to reflect changes in leadership and population growth are at risk of falling behind, says Meesha Rosa, senior director of corporate brand services at Catalyst, a nonprofit that helps women reach leadership positions. In order to retain women and promote them to higher positions, companies need to sponsor them, stand up for them, and ensure they are given “critical roles and assignments” that can lead them to higher positions.

“If you’re not ready to take that leap, you’re not giving yourself the competitive edge to strategically align yourself with,” says Rosa.

According to Lean In, only 21% of C-suite executives are women and only 1% are black women. When Rosalind Brewer stepped as CEO of Walgreens earlier this month, she was the only current and third black woman to have worked at a Fortune 500 company.

Many companies are launching initiatives to help women and minorities achieve racial equality. Wall Street giant Goldman Sachs recently pledged $ 10 billion over the next decade to improve economic opportunities for black women. Their research suggests that reducing the gap could result in up to 1.7 million jobs and increase U.S. GDP by $ 450 million annually.

The first step for many companies is to acknowledge the systematic inequality of black women in the workplace, but they also need to act, Hart says. C-suite executives are often given the opportunity to work in executive board positions that provide the opportunity to make decisions. However, companies need to invest in succession planning, which trains black and minority women to take on leadership roles. Black women get 63 cents for every dollar paid to white, non-Spanish men.

“We’ve talked a lot over the past year about racial justice and promoting black and brown women in the workplace. However, if we look at some of the companies that have made these statements, their pages about us still look the same,” Hart says.

From accelerating innovation to redistributing limited capital, the global pandemic has profoundly disrupted work. What is the next step in your company’s transformation? Find out more at the CNBC @ Work Summit on March 30th. Hear from the world’s most influential voices shaping the future of work, including Caroline Wanga, actor and writer Matthew McConaughey, Reid Hoffman from Greylock and Sarah Guo, Kathleen Hogan from Microsoft, and more. Join Now.