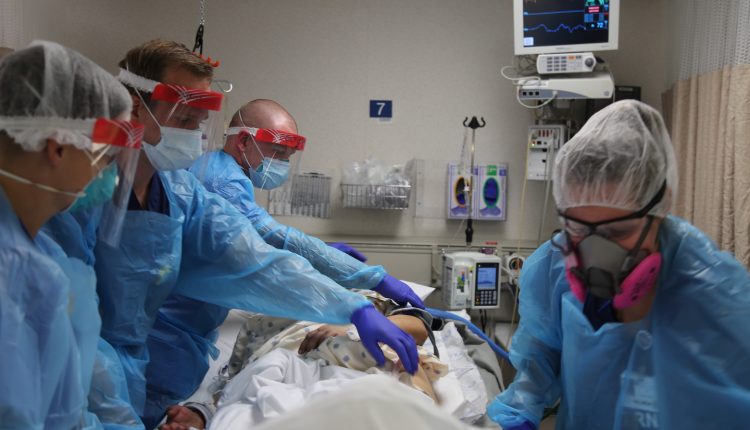 Amid a devastating pandemic, fresh ideas to cover the 30 million currently not insured Americans are more important than ever. Jim Capretta, health professional at the American Enterprise Institute, says we can do a lot now, with a few sensible steps: “There is literally tens of millions of people out there that are considered uninsured but really should be insured because we have already created something for them. “

Listen to the full conversation here:

The following is an excerpt from our conversation in the “Big Ideas” podcast about these innovative ideas.

Matt Robison: Over the past decade, the US has reshaped the way we pay for people’s health insurance through the Affordable Care Act, also known as Obamacare. Everyone agrees that we need to expand coverage and control costs. They just can’t agree on how to get there. So Jim, what changes has the ACA made to health insurance and coverage in America?

Jim Capretta: Two things. One was to significantly increase the subsidies that would help people struggling to get insurance. It consisted of two parts: building Medicaid – our safety net health insurance program in the United States – and creating premium subsidies when people buy their own individual insurance. The second was to say that anyone who had previously had a so-called pre-existing disease would be treated the same as anyone else. That was a big deal.

Matt Robison: What did the ACA do right? And what gaps did it leave behind?

Jim Capretta: What they did well was creating a new single market purchase subsidy system that didn’t really create a whole new bureaucracy. It’s kind of amazing. You basically go to these ACA sponsored exchange websites and if you are a person eligible for a grant you will be automatically signed up for it. In the US, 15% used to be uninsured, down from around 7%.

In terms of gaps, of course, once you’ve cut something in half, half is left. The other big thing that hasn’t been resolved in the United States is that there is no cost discipline.

Matt Robison: Are the major reforms proposed by both parties likely?

Jim Capretta: In politics, there is one rule when it comes to healthcare: there is a lot of talk, but in general, and this includes the ACA, the changes made are incremental. You have to build on what exists because disruption is so politically unpopular. That was true of the Republicans when they tried to talk about repeal and replacement. And the same goes for Medicare for All – that’s just a very, very difficult sale.

Matt Robison: You wrote a commentary in your New York era suggesting not just one, but three ideas for possible compromises. What’s the first of your great healthcare ideas?

Jim Capretta: There are approximately 30 million people in the United States who do not have year-round health insurance. Twenty million of these people are already eligible for public insurance, primarily Medicaid and the children’s health insurance program, or subsidized private insurance through the Affordable Care Act exchanges.

So you can turn to an automatic registration. If you were uninsured on the federal tax form for the past year and your income is below a certain level, states would put you on either the Affordable Care Act exchanges in Medicaid or one of the subsidized options. And that would be automatic. You can unsubscribe if you don’t like it. But otherwise you are there and often you don’t owe a premium for it.

So this is a way of saying there are literally tens of millions of people out there who are considered uninsured but really should be insured because we have already created something for them. Let’s find out how we can make them do it.

Matt Robison: So with one very simple change we could add millions of people?

Jim Capretta: That’s true. This is how the government tries to side with the people and say, let’s make it easy for you.

PoliticusUSA readers – and my podcast listeners – want a more thoughtful, positive analysis that covers not only our problems but some solutions as well. This excerpt is from my new podcast which does just that and is called “Great Ideas”. The host interviews a different policy expert each week from across the political spectrum Who offers constructive ideas on how we can solve our challenges.

In cooperation with PoliticusUSA we offer extracts in this area every week. Hope you keep coming back to read more and subscribe to the podcast. To hear Jim Capretta’s other innovative healthcare ideas, my discussion with PoliticusUSA Editor-in-Chief Sarah Jones, and to subscribe to, read the full episode on Apple, Spotify, Google, anchor, Breaker, bag, RadioPublic, or Stitcher.

Matt Robison is a writer and political analyst focusing on demographics, psychology, politics, and economics trends that shape American politics. He spent a decade on Capitol Hill as the legislative director and chief of staff for three members of Congress and also served as a senior advisor, campaign manager, or advisor on several New Hampshire congressional races. In 2012, he ran a comeback race that national political analysts named the biggest surprise win of the election. He then served as Policy Director in the New Hampshire State Senate, successfully helping to coordinate legislative efforts to pass the Medicaid expansion. He has also done extensive private sector work on energy regulation policy. Matt has a bachelor’s degree in economics from Swarthmore College and a master’s degree in public policy from Harvard Kennedy School of Government. He lives in Amherst, Massachusetts with his wife and three children.

5 issues it’s best to know earlier than the inventory market opens on February 16, 2021