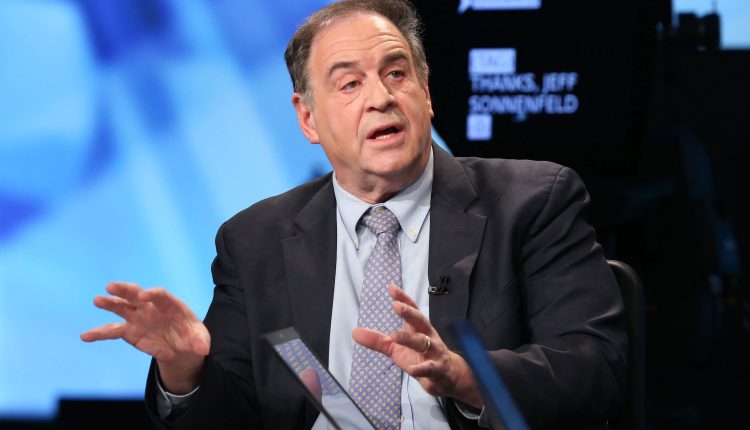 Sonnenfeld’s comments on “Closing Bell” came after hosting a virtual conference with 33 executives earlier in the day. It comes roughly two months after Sonnenfeld called a similar meeting focused on Trump’s response to the November 3rd presidential election.

In a survey of CEOs when he called, Sonnenfeld said 100% of respondents answered “yes” to the following question: Should CEOs privately warn lobbyists that their companies will no longer support denial of election results in Congress?

Sonnenfeld said business leaders were hoping to get the message across that “it is time to move on and respect the constitution”. He said the gathering attendees who were granted anonymity ranged from funding to manufacturing to pharmaceuticals.

Tuesday’s call came the day before Congress to confirm Democratic President-elect Joe Biden’s victory on the electoral college. In the past few years this has been viewed as a formality. However, numerous Republicans in the House and Senate plan to object to Biden’s victory on Wednesday.

“The GOP that is acting like this, these GOP members, are certainly not the voice of American companies big or small. So they are talking about cutting off support,” said Sonnenfeld.

Trump has refused to admit, repeatedly and falsely claiming that he would have won the election had it not been for widespread electoral fraud. There is no evidence to support his claims and courts in the US have dismissed the legal challenges posed by Trump’s campaign. Even so, Trump said on Monday that he wanted to “fight like hell” to keep the presidency.

Sonnenfeld said CEOs were alarmed by Trump’s handling of his defeat and wanted to send an even firmer message than it was in November. “In the past, concerns had a lot more to do with making a clear statement,” he said. For example, he pointed out that the U.S. Chamber of Commerce congratulated Biden on the same day major news organizations projected him as president-elect.

“We haven’t seen them put the money where their mouth is, and that’s a big change,” Sonnenfeld said when asked if business leaders would actually respond to their suggestion for future support To forego Republicans trying to hinder Biden’s victory.

A key concern of business leaders is that if Biden is sworn in later this month, Republican objections to Biden’s victory could be a harbinger of the dispute, according to Sonnenfeld.

“There are other areas of great mutual interest, one would think, between the parties and [CEOs] hope we can make progress, “said Sonnenfeld, as does US-China relations.” They are trying to get past the flame throwing, the tweets, and making real progress, and they are really concerned about a Congress that does it act in this divisive way. “