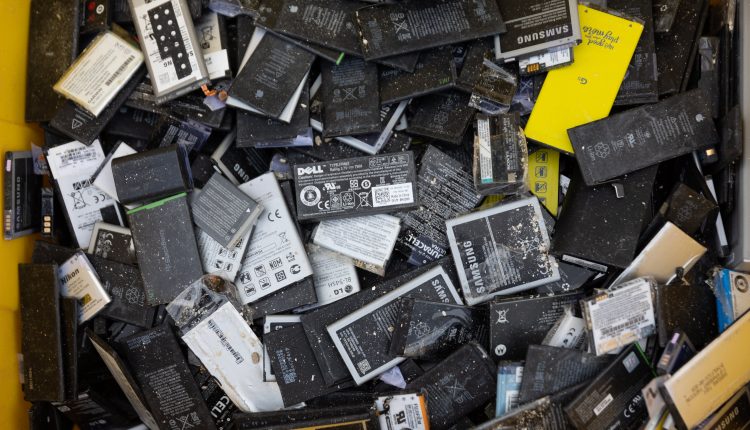 In every smartphone and tablet there is a dense stone with a dark and complex story: the battery. The lithium that ferries load back and forth likely began in South American salt marshes, where months of evaporation in some of the world’s driest regions consumed millions of tons of water. The cobalt that buffers the material against the ravages of daily charging is believed to have come from the Democratic Republic of the Congo, where children were allegedly maimed and killed to pull it from the ground. It may have taken thousands of people from perhaps a dozen countries to collect the various atoms and shape them into a functioning battery. After a few years of use, used devices often end up in landfills and incinerators.

With lithium-ion batteries poised to jump from handheld devices in cars, trucks, and homes, entrepreneurs and scientists are looking for a way to reuse the hard-won materials. Investors bet millions that a Nevada company, Redwood Materials, can mine electronic scrap for metals. A competitor, Li-Cycle, wants to solve the logistical puzzle of battery transport. Others are developing the technology to rejuvenate dead batteries without damaging them completely. By attacking the problem on all fronts, the teams are working towards one goal: to turn exhausted batteries into a valuable resource.

“We spend all of this money making batteries and chemicals and burning them at the end of the cycle,” said Tim Johnston, co-founder and chairman of Li-Cycle. “That is not right.”

Industry insiders speak with excitement and concern about an impending battery tsunami. According to Ajay Kochhar, co-founder and president of Li-Cycle, people around the world are already throwing out more than 500,000 tons of lithium batteries, mostly in the form of small electronics. With the world’s transition to an electric economy, the appetite for lithium-ion bricks is expected to increase tenfold by 2030. Most of this explosion will be powered by electric vehicles that carry batteries weighing more than 1,000 pounds. “We’re at the tip of the iceberg,” says Kochhar.

Kochhar and others see this problem as an opportunity to replace today’s fragile and problematic supply chain with a more “circular” system that builds the next generation of batteries from last generation materials. And they won’t just recycle for recycling purposes. The market for recycling lithium-ion batteries alone could be worth US $ 18 billion annually by 2030, Statista estimates, up from US $ 1.5 billion in 2019.

Recycling start-up from the Tesla co-founder

One start-up that is leading the US market is Redwood Materials, the youngest company from Tesla co-founder JB Straubel. During the 16 years that he served as Tesla’s CTO, Straubel realized that there was no plan to rework the cars at the end of their life. And unlike a phone, a half-ton car battery can’t just lie in the back of a garbage drawer. Most electric vehicles are in their prime right now (Straubel drives what he believes is the world’s oldest Tesla – a prototype roadster from the late 2000s), but the tsunami will begin when early electric cars retire en masse over the next five years walk .

We spend all that money making batteries and chemicals and we burn them at the end of the cycle. That is not right.

Since launching in 2017, Redwood Materials has been preparing for this first wave. The startup’s two facilities in Carson City are currently handling all waste and defective batteries that come from the nearby Tesla Gigafactory, which is jointly owned by Panasonic. Tesla scrap alone supplies around one gigawatt of material annually, and a dozen other partners make a similar contribution, making a total of around 20,000 tons of material per year. The company recently partnered with Amazon to dispose of batteries from the retail giant.

From batteries to atoms

After sorting out the newcomers, the company uses proprietary procedures that use a combination of burning batteries to melt their contents and immerse them in liquids that leach out the elements you want (although the exact procedure is tailored to the type of battery). In the end, according to a company spokesman, the technologies recover 95% to 98% of the nickel, cobalt, aluminum, graphite and more than 80% of the lithium in a battery. Much of this material is being bought back to Panasonic to make new Tesla batteries.

“Redwood Materials has put together an excellent team to work with us to tackle a wide variety of waste streams and develop raw materials that we can then use in our cell manufacturing processes,” said Celina Mikolajczak, battery technology vp for Panasonic Energy of North America.

The materials companies and researchers hope to recover from a battery pack.

The company is currently working to increase the capacity of its Carson City facilities with the help of $ 40 million from the Capricorn Investment Group and Breakthrough Energy Ventures, an environmental investment fund, to Amazon founder Jeff Bezos and Microsoft co-founder Bill Gates belong, were financed.

A “hub and spoke” model

Johnston and Kochhar founded Li-Cycle in a similar way, starting it in 2016 after working together at Hatch, a global engineering firm specializing in battery chemicals. You have structured your business on a hub-and-spoke model.

Because batteries are flammable, safe transportation can be expensive. To keep the gaps small, Li-Cycle intends to collect batteries in local “spoke” facilities that break the stones down into three components: plastic casing, mixed metals (like foils), and the active materials like cobalt and nickel in the Heart of the battery – a dark dust known as “black mass”.

Li-Cycle can sell these materials directly or deliver the black mass to a central “hub” factory and immerse them in fluids at room temperature, which Johnston says extract the metals – even lithium, with that with an efficiency of 90% to 95% many processes have to struggle to capture efficiently.

The company currently has two spokes, one in Ontario, Canada and one in Rochester, New York, that can break apart a total of 10,000 tons of lithium-ion batteries each year. Li-Cycle recently announced plans to build its first hub, also in Rochester, which will be able to separate 25,000 tons of black matter (from 65,000 tons of batteries) annually into lithium, cobalt, nickel and other elements from the end of 2022. Like Redwood Materials, the company hopes to expand as quickly as possible after raising around $ 50 million in funding to date.

“This is a big room and we need an army of recyclers,” says Kochhar.

Looking ahead, however, the researchers find that the long-term margins in collecting batteries for their atomic parts can prove to be extremely small. The chemical structure of batteries changes from year to year – Panasonic, for example, reduced the cobalt content of Tesla batteries by 60% between 2012 and 2018. These changes may require continuous optimization of the recycling process while also making it less lucrative (cobalt is the most expensive and valuable battery element).

A more efficient way could be to recycle batteries at a higher level and save their larger molecular structure as opposed to their atoms. Steve Sloop, chemist and founder of a battery research company called OnTo Technology, compares a battery to a house. Why not renovate instead of chopping it down for wood and brick? “A lot of energy is invested in production [batteries]”, he says.” We are trying to save this investment. “

In the case of lithium-ion batteries, this means that the lithium is replaced, a little of which sticks to the molecular structure of the battery each time it is charged and discharged. If the battery runs out of free flowing lithium, it dies. In September, Sloop published a case study describing how his lab automatically disassembled and crushed recalled Apple batteries and dipped their active materials in a lithium-rich bath to restore them to pristine condition. The end product was the first complete fuel cell to be reassembled from an industrial source.

And OnTo Technology is just one group that follows this “direct recycling” strategy. The Department of Energy is funding a research consortium called the ReCell Center that supports similar projects. The center is currently organizing an informal competition between different types of “re-lithiation” to see which performs best, according to Linda Gaines, a transportation systems analyst at Argonne National Laboratory who leads the effort.

“Re-lithiation has come a long way,” she says. “It’s really in the phase where we can think about enlarging.”

Scaling will be the biggest challenge for all of these initiatives. In the laboratory, it is relatively easy to reduce batteries to atoms or replace lithium. But how you collect, transport, sort, dismantle, process and redistribute the millions of tons of material that comes is anything but.

“This is a new technology coming out,” says Gavin Harper, a materials scientist at the University of Birmingham who is involved in ReLib, a UK battery recycling project. “We have not seen the problems and challenges and the opportunities that arise from them.”