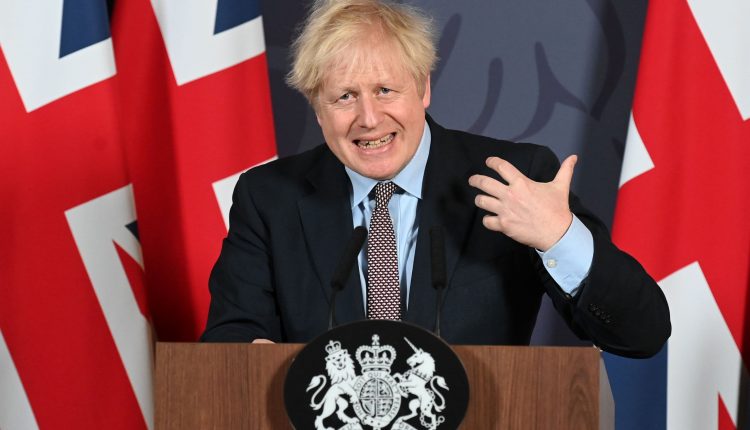 UK Prime Minister Boris Johnson will hold a press conference at 10 Downing Street in central London on December 24, 2020 to brief the nation on the post-Brexit trade deal.

LONDON – The UK and the European Union struck new Brexit trade deals on Thursday, more than four years after the UK voted to exit the bloc, narrowly avoiding a potentially catastrophic no-deal scenario.

The two sides have reached a “zero tariff-zero quota deal” which will help smooth trade in goods across the channel. This will bring relief to exporters on both sides who have faced higher tariffs and costs if no agreement is reached.

The trade agreement has yet to be ratified by the UK and EU parliaments in the coming days. A vote in Westminster is scheduled for Wednesday.

“The clashes with our European partners have been fierce at times, but I think this is good business for all of Europe,” Johnson said at a press conference.

While von der Leyen said, “It is fair, it is a balanced deal and it is the right and mutual responsibility. She added that Europe will continue to work with Britain in all areas of what she termed Britain.” “Trustworthy partner.”

About 47 years after joining the European Union, the UK officially left the bloc on January 31, 2020. It was the first country to leave the EU. However, it was agreed to comply with European regulations by the end of 2020 in order to negotiate friendlier trading conditions with the 27 other nations.

Both sides have been in intense talks since March to determine how trading will work from January. There was significant conflict over the fisheries, the rules of competition – known as the “level playing field” – and the governance of their new relationship.

As part of the agreement, the EU has achieved a level playing field, which means that neither side can undercut the other with subsidies or the like. However, Johnson stressed that the UK and the EU act as “sovereign equals” and tariffs can be levied if one side undercuts the other.

With regard to fisheries – which seems to have been the problem that stalled the agreement in its final stages – there will be a transition period of five and a half years during which EU fishing vessels will continue to have access to UK waters. Thereafter, negotiations on catch quotas are held annually.

The period is longer than Johnson’s original aim, but shorter than the 10 years proposed by the EU.

During that period, the UK’s share of fish caught in UK waters will rise from around half its current level to two-thirds, Johnson said.

Thursday’s news is a welcome development for businesses in the UK and Europe, ending more than four years of intermittent economic uncertainty.

Von der Leyen said she was very pleased “and frankly relieved” to have reached a deal.

“I know this is a difficult day for some and I want to say to our friends in the UK that saying goodbye is such a sweet sorrow,” she added.

EU negotiator Michel Barnier agreed that it was a day of relief, but that it was “a little sad”.

Citi analysts said the deal would help mitigate economic disruptions and could provide a starting point for constructive future economic and political relationships. But they added that this would be a “massive step backwards from existing relationships” and the “last minute rushed character could trigger more sharpness”.

Susannah Streeter, a senior investment and market analyst at Hargreaves Lansdown, predicted that a deal with the EU would fuel a recovery for an economy that saw sharp contractions in 2020.

“This surge in confidence and investment would help the UK overcome the Bank of England’s predicted 1% drop in GDP, which will be the price to pay for leaving the European Union with a deal next year,” she said in a Flash research report of the deal.

“If the recovery continues without further setbacks from the pandemic and is supported by a recovery in global growth, it could usher in a new era of the 1920s, reflecting decades of rebound after the economic pain of World War I.”

Saweetie is giving Quavo a $ 300,000 Richard Mille look ahead to Christmas

Pupil athletes worry the coronavirus might jeopardize their scholarships