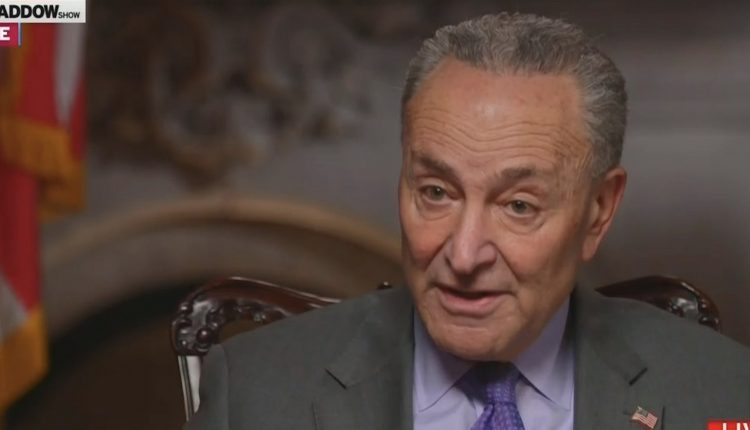 The times of Mitch McConnell holding the Senate hostage are over

Senate majority leader Chuck Schumer (D-NY) reminded Mitch McConnell (R-KY) on Monday that he had lost the Senate and could no longer take the chamber hostage.

During an interview with MSNBC’s Rachel Maddow, Senator Schumer said, “He’s not the majority leader, he’s the minority leader, and he’s not going to prevail.”

“He’s not the majority leader, he’s the minority leader, and he’s not going to get his way,” Chuck Schumer tells #maddow as Mitch McConnell tries to stand in the way of the Democratic majority. pic.twitter.com/hVERrBNeBp

He is not the majority leader. He is the leader of the minority. And he won’t prevail. We’re not going to do what he wants, and that’s universal, Rachel, in my caucus, from the most liberal to the most conservative. We hope that he will come to his senses in the next day or two and accept our offer. But we don’t give in to him. It was outrageous what he did and it really upset my entire caucus. That wasn’t the beginning.

McConnell is unable to make demands

Chuck Schumer and Mitch McConnell have negotiated a power-sharing deal in the Senate, but the Kentucky Senator is demanding assurances that the Democrats will keep the filibuster.

The Democrats were quick to put down McConnell’s efforts, and Schumer’s comments to Maddow indicate he will not be pushed around by the minority leader.

According to MSNBC’s Kyle Griffin, Schumer’s strategy appears to have worked as McConnell announced late Monday that he was pulling out of his filibuster demand and would finally support rule resolution.

During his tenure as the majority leader, McConnell transformed the Senate into a place where good laws stall. He even bragged about being called the “Grim Reaper”.

After Mitch McConnell lost control of the U.S. Senate – with the great support of Donald Trump – his days of making demands and taking the chamber hostage are over.

As Joe Biden waits at the White House for Congress to be quickly on its agenda, the Democrats seem poised to do whatever it takes to make sure they deliver.