Sen. Hirono Is Optimistic That Democrats Are Going To Deliver For President Biden 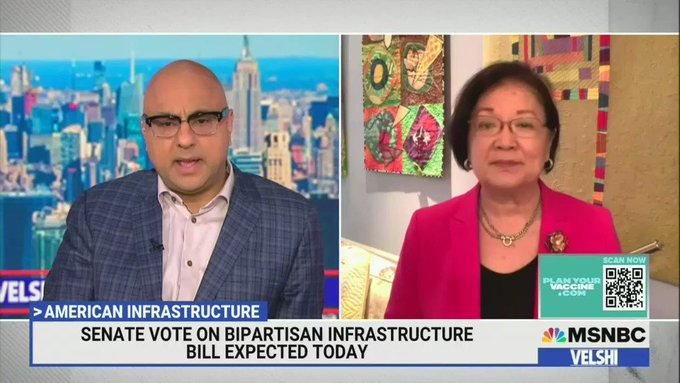 Hirono said on MSNBC’s Velshi, “When we get to the other bill, that’s just going to require the 50 Democrats. And I feel quite confident that the 50 Democrats who actually care about getting our economy back on track and millions of women enabling them to get back to work that there will be an agreement on the budget bill. Ali, one of the stopgaps will be that the House is saying we’re not going to vote on either bill unless both bills are passed. And so both bills, I think, will pass. I feel more confident than I usually feel that we’re going to get there. The Democrats want to get on to the American family plan, as I mentioned, that will enable people to get back to work.”

Biden Is Set For A Major Victory

Some on the left downplay the bipartisan infrastructure bill, but that legislation will create 2 million jobs a year for the next ten years. The American Families Plan will make key investments in daycare, healthcare, climate change, infrastructure, and multiple other areas.

It will be a major win and taken together, both bills will represent the biggest government investment in infrastructure in decades.

Democrats are stepping up and helping President Biden deliver exactly what he promised.

Princess Charlotte cradles a butterfly in a cute new picture