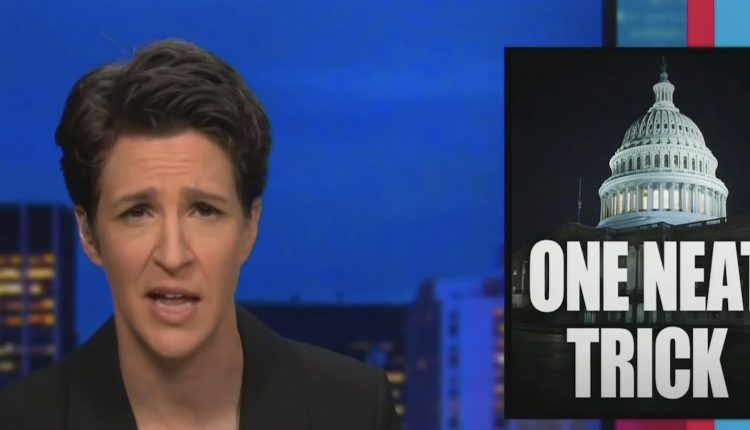 Rachel Maddow said Thursday if Democrats get things done and really want to navigate this moment of crisis, they might consider killing the filibuster.

The MSNBC host said Democrats can only pass two bills this year if they use the budgetary vote process – a maneuver that allows bills to clear the Senate by simple majority.

To achieve something else like an immigration reform bill or a voting rights bill, the Democrats would have to either convince 10 Republican senators to join them – don’t bet on it – or eliminate the filibuster.

“You can either persuade 10 Republicans to leave their bodies and do something they are constitutionally incapable of doing in this era of the Republican Party, or your other option … is to vote yourself, all Democrats, to get rid of the filibuster, “said Maddow.

According to Rachel Maddow, Democrats may have to end the filibuster if they want to advance Joe Biden’s agenda. #maddow pic.twitter.com/8SnjbpU31J

But the bottom line is that with the reconciliation process, if the Democrats stick together, even if they don’t get Republican votes, they can pass two big bills this year. If you want to pass something else on, you only have two options. Either they have to convince ten Republican senators to transition – and ten Republican senators probably wouldn’t go to the Democratic vote to proclaim kittens soft, let alone vote with Democrats on something like immigration reform or COVID relief or infrastructure or voting rights , are you kidding me? Ten Republican Senators, seriously? You can either convince ten Republicans to get out of their bodies and do something they are fundamentally unable to do in this Republican Party era, or their other option if they want anything to happen at all while Joe Biden is president is … the only other thing they do. You can vote yourself, all Democrats, get rid of the filibuster, get rid of that in the Senate, so that a majority decision from now on determines the day of all laws and there is no more 60 -vote threshold. … It has become the only thing that decides whether we can do anything essential to get our country out of the chaos we find ourselves in. If we can use the power of government to make lasting changes to address the fundamental problems we find ourselves in, fund a vaccination program nationwide. To free the American people from the economic and health disaster we are in right now. Support our democracy, support and support the right to vote. To finally reform and rationalize our absolutely broken immigration system. If we want to do any of these things, we are there now.

In a perfect world, the United States would have two major political parties that could come together in times of crisis to promote meaningful solutions.

But the Republican Party is broken in a way that cannot be fixed, at least in the short term. It has become completely unable to cope with this moment of national emergency.

If Joe Biden and the Democrats are looking to pass a much-needed bailout to help millions of Americans struggling through this pandemic, they shouldn’t hesitate to play hardball to make it happen.