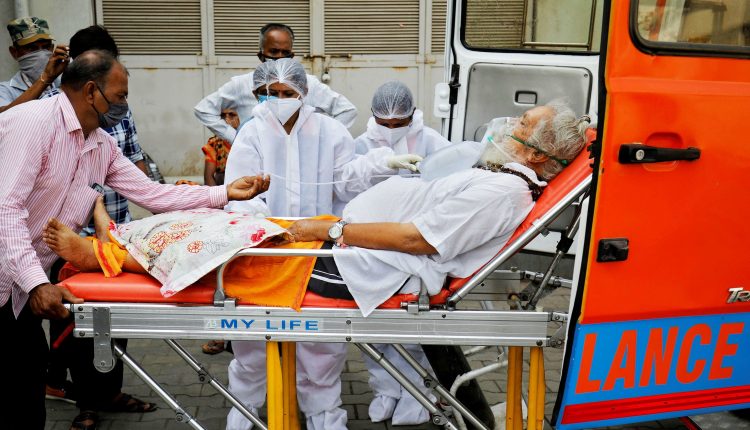 A patient wearing an oxygen mask is wheeled inside a COVID-19 hospital for treatment, amidst the spread of the coronavirus disease (COVID-19) in Ahmedabad, India, April 26, 2021.

India’s daily reported death toll from the coronavirus crisis reached a record high on Thursday, with more than 6,000 people succumbing to the disease.

That surpassed a record number of daily fatalities reported by the United States this year.

The fatalities rose after one of India’s poorest states, Bihar, revised its total Covid-19 related death toll on Wednesday from about 5,400 to more than 9,400, accounting for people who died at home or in private hospitals, Reuters reported.

India is fighting a devastating second wave of outbreak that started in February and accelerated in April and early May, which overwhelmed the country’s health-care infrastructure. The sector struggled with shortages of beds, oxygen and medication while many doctors and other health-care workers succumbed to the disease.

While cases peaked in early May, government officials have sounded the alarm over a potential third wave that could hit the country later this year.

Experts say that ramping up the vaccination program is the way forward for India, both to bring its economy out of the Covid crisis and to mitigate the effects of a third wave. But the rollout, which began in January, faced problems including a vaccine shortage, resulting in less than 5% of the population so far receiving both doses.

The government estimates that more than 2 billion doses of vaccine could be available by December as more vaccine candidates are expected to receive regulatory approval. Prime Minister Narendra Modi this week said that India will provide free Covid-19 vaccines to all adults.

India has reported more than 29 million cases and over 353,000 deaths since the pandemic began last year.