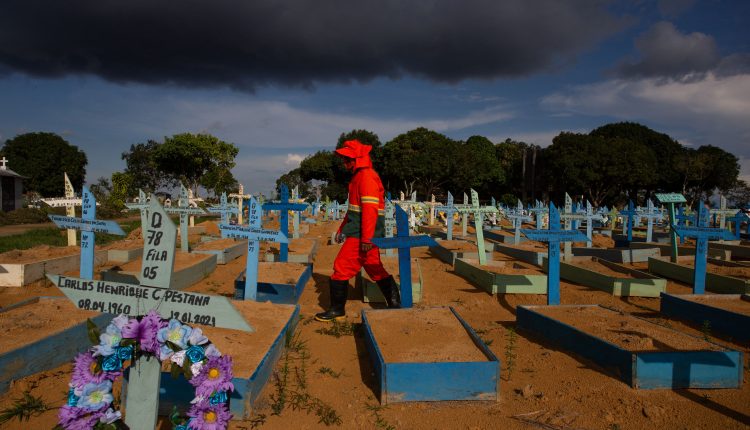 Brazilian President Jair Bolsonaro is undergoing a congressional investigation into the mismanagement of the pandemic.

Health experts fear the Brazilian Covid-19 disaster could get worse in the coming months, while a parliamentary investigation into the government’s response to the pandemic is likely to increase political pressure on President Jair Bolsonaro.

South America’s largest country, previously known for its leadership skills in health crises, has grown into an international pariah amid the coronavirus pandemic. Brazil has had the highest number of coronavirus-related deaths in the world outside the US, has lagged behind on vaccinations and still lacks an effective and coordinated public health response to the outbreak.

An official investigation, approved by the Brazilian Supreme Court, opened late last month to look into the government’s handling of the pandemic, which killed more than 430,000 people. The investigation could pave the way for Bolsonaro’s impeachment, though analysts say political opponents of the right-wing leader may prefer to contest the president in the October 2022 election.

Bolsonaro has reportedly said he was “not concerned” about the investigation. A Brazilian government spokesman did not respond to a request for comment when contacted by CNBC.

Bolsonaro has repeatedly spoken out against public health measures, which have become a political battleground in Brazil, and continues to oppose any lockdown measures to contain the spread of the virus.

“The current unrestrained epidemic will not be overcome without a dramatic change in direction,” said Dr. Antonio Flores, Infectious Disease Specialist and Covid Medical Advisor at the Medecins Sans Frontieres aid group in Brazil.

He said that if life goes on normally, “with such a high daily incidence, all you can expect is a new wave of cases, an additional thousands of deaths and more pressure on the already stretched health system.”

A gravedigger walks among the graves of COVID-19 victims at the Nossa Senhora Aparecida cemetery in Manaus, Amazonas state, Brazil, on April 29, 2021.

His comments echo warnings from other health experts that Brazil could soon experience a third wave of Covid infections in the coming weeks. It is feared that the country’s weak vaccination efforts will not be enough to prevent a new surge in the winter months of June through September, when indoor gatherings and activities are particularly risky.

Flores told CNBC that all available public health measures should be stepped up “as soon as possible” and that the country’s vaccination campaign needs to be accelerated. He added the need to put in place an effective testing and traceability system, as well as coherent guidelines on public health restrictions.

“A crucial element in next year’s elections”

Brazil’s lower vaccination rate means millions of people across the country and beyond its borders are at risk from more than 90 variants of the coronavirus currently circulating in the country – in addition to any new mutations that may emerge.

Brazil’s Covid vaccination campaign is in stark contrast to its response to the H1N1 swine flu pandemic in 2009, when 92 million people were vaccinated against the virus in just three months. The main difference this time around, analysts say, is Bolsonaro’s refusal to take a science-led approach to addressing the health crisis.

This is a very dangerous government, but since it was democratically elected, very little can be done at the moment to push back.

President of the Igarape Institute

The Pan American Health Organization announced on Wednesday that nearly 40% of all global Covid-related deaths reported in the past week have occurred in the Americas. Almost 80% of the intensive care units in the region are currently staffed with patients. PAHO director Carissa Etienne warned it was clear the broadcast “is far from being controlled,” even as the US and Brazil report reductions in some cases, Reuters reported.

Brazil recorded more than 74,000 cases of the coronavirus on Thursday, after peaking at over 100,000 daily infections in April. In terms of infection numbers, it remains the third worst Covid-affected country in the world after the US and India.

“I think while the situation in India has gotten significantly worse lately, the numbers in Brazil have risen to a very, very high level. The country has actually been in a collapse for months,” said Oliver Stuenkel, Associate Professor of International relations at the Getulio Vargas Foundation in Sao Paulo, said CNBC by phone.

“What is really so fascinating is that (former US President Donald) Trump and to some extent (Indian Prime Minister Narendra) Modi are paying a political price. Bolsonaro has been able to and has not retained fairly high political support by a combination of factors done. ” however, had to pay for it because its strategy of avoiding responsibility has so far been remarkably successful, “he added.

Analysts said the government’s investigation into treatment for the pandemic will typically take around three months, but the process can take much longer.

Stuenkel said he expected the investigation to take about six months since “the real goal is to hammer home the news on the evening news that Bolsonaro was to blame”.

“Essentially, I think the investigation will be vital because if the investigation cannot change public opinion at this point, after 400,000 people have died and basically the health system has finally collapsed, basically nothing can .. . For me the crucial element is next year’s election, “he added.

Earlier this week, former Brazilian Health Minister Luiz Henrique Mandetta, who was fired over a year ago after resisting Bolsonaro’s push to use the malaria drug chloroquine as a covid treatment, testified ahead of a parliamentary inquiry.

Mandetta said Bolsonaro was fully aware that the treatment had no scientific basis. Former US President Donald Trump had also pushed for the use of the related drug hydroxychloroquine amid the pandemic, despite a lack of scientific evidence.

“Unfortunately, this is a very dangerous government, but since it was democratically elected, very little can be done right now to push back,” said Ilona Szabo, president of the Igarape Institute, a think tank based in Rio de Janeiro.

Szabo said that while she did not believe the investigation would have “immediate” political implications, “it is important that what happens today has ramifications for the future.”

“It is proven that they are responsible and that most of the deaths were preventable,” said Szabo.