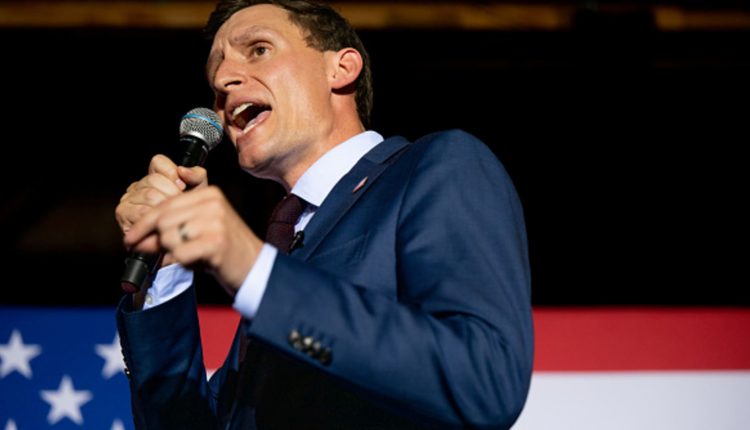 Republican US senatorial candidate Blake Masters speaks at a campaign event on the eve of the primary, on August 01, 2022 in Phoenix, Arizona.

Republican leaders and megadonors are warning Arizona GOP Senate candidate Blake Masters to improve his fundraising or else be doomed in his bid to unseat Democratic Sen. Mark Kelly in November’s election, according to people familiar with the matter.

Masters has received urgent private calls in recent weeks from GOP leaders like Sen. Rick Scott, R-Fla., the head of the National Republican Senatorial Committee, these people explained. The NRSC is the official campaign arm for the Senate GOP, and has spent over $6 million taking on Masters’ rival Kelly, according to data from the nonpartisan OpenSecrets.

Kelly’s seat has long been considered a potential pickup opportunity for Republicans, as forecaster Cook Political Report labels the race a toss-up. Recent polling, however, suggests that Masters is falling behind. A Fox News poll taken in August shows Kelly leading Masters by 8 points, while an Arizona Republican pollster told NBC News that his own surveys showed Masters trailing Kelly by 10 points.

Longtime GOP megadonors, who want to help Masters overtake Kelly but have not heard from him since he won the party’s primary, have inundated the Republican candidate with calls, these people explained.

A person familiar with one of the recent calls to Masters said a veteran GOP financier “read him the riot act” and told him, in part, that he must start raising money from more wealthy Republican donors and stop relying on billionaire tech executive Peter Thiel , his longtime colleague and friend, to help him like he did in the primary. These people declined to be named in order to speak freely about private conversations.

Shortly after publication of this story, Katie Miller, a spokeswoman for the Masters campaign, denied that the candidate ever heard from a GOP megadonor who “read him the riot act.” Miller told CNBC in an email: “It didn’t happen.”

Kelly has massively outraised Masters, who won a Republican primary in Arizona this month. The incumbent’s campaign has amassed more than $54 million during the 2022 election cycle, compared with just over $4 million for Masters’ campaign, according to the latest Federal Election Commission data.

Thiel contributed $15 million during the primary to a pro-Masters super PAC, Saving Arizona, and he donated $1.5 million to the committee as recently as July. Masters was the chief operating officer at Thiel Capital, an investment firm founded by Thiel.

The calls to Masters come as even some Republican leaders seem to be questioning their Senate candidates. When asked about his predictions for the midterms, Senate Minority Leader Mitch McConnell, R-Ky., said “candidate quality” has a lot to do with winning Senate elections. He added that he believes there will be an “extremely close Senate” after November’s elections.

The Senate is currently split 50-50 between Democrats and Republicans.

In a statement to CNBC, NRSC spokesman Chris Hartline did not deny that Scott called Masters to urge him to improve his fundraising operation.

“Mark Kelly votes with Joe Biden almost 100% of the time. While he claims to be a moderate, he’s supported reckless Washington spending and done nothing to address the border crisis that’s raging in Arizona. The NRSC will continue to remind Arizona voters of Mark Kelly’s radical agenda and Blake Masters’ plans to fight for Arizona families,” Hartline said in response to questions about Scott’s contact with Masters.

Data from ad tracker AdImpact shows that the NRSC has booked just over $3.8 million in ads in Arizona for September, but nothing yet for October or November. The ad tracker also shows that Masters’ campaign has not yet booked airtime for the fall while Kelly’s team has reserved over $10 million in ad space from September through November.

AdImpact says it has not yet seen data showing the Thiel-backed Saving Arizona reserve airtime for the fall. The last spending it saw from the super PAC was on Aug. 2, the day of the Arizona Senate Republican primary. The super PAC spent over $10 million during the primary, including almost $8.5 million backing Masters, according to OpenSecrets.

The candidates and outside groups from both sides of the aisle have combined to spend over $90 million in the general election Senate race in Arizona. Yet Democratic organizations appear to be outspending their Republican rivals in the Grand Canyon State on ads in the coming months.

AdImpact’s data shows Democratic outside groups are reserving nearly $28 million worth of ad time in Arizona over the next three months. Republican committees have so far spent just over $16 million on ad buys within the same time span trying to help Masters overtake Kelly, according to the data.