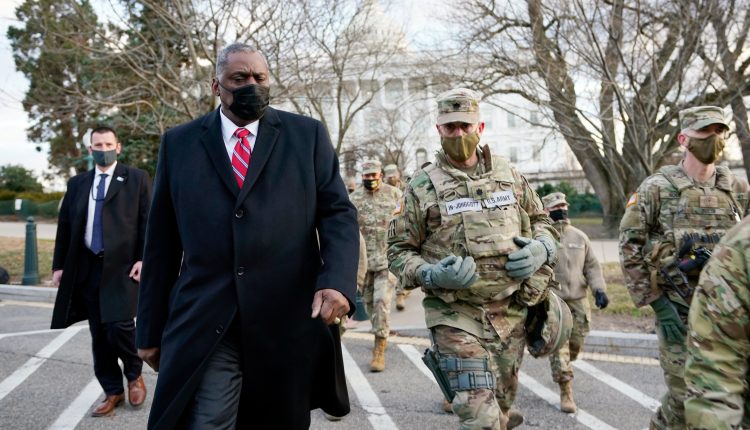 Secretary of Defense Lloyd Austin visits National Guard forces stationed in the U.S. Capitol and its vicinity on Capitol Hill in Washington, DC, on January 29, 2021.

Secretary of Defense Lloyd Austin has approved the deployment of more than 1,000 active troops to deliver Covid-19 vaccines in the U.S., a member of President Joe Biden’s coronavirus response team said Friday.

Some of the troops will arrive in California within the next 10 days and begin operations by February 15. More states are set to follow, Andy Slavitt, a senior advisor on Biden’s Covid-19 response team, told reporters.

“The vital role of the military in supporting sites will help vaccinate thousands of people every day and ensure that every American who wants a vaccine receives it,” he said during the White House news conference.

Biden is trying to accelerate the pace of vaccination in the US after a slower-than-expected rollout under the administration of former President Donald Trump. The U.S. has distributed about 57.4 million vaccine doses, but only about 35.2 million had been administered as of 6 a.m. ET Thursday, according to the Centers for Disease Control and Prevention.

The Pentagon is working with the Federal Emergency Management Agency to expedite the delivery of the shots, and is also considering requests to deploy up to 10,000 soldiers across the country in support of the vaccination effort. FEMA and the Department of Defense will work together to determine when active members will no longer be required.

The 1,110 active duty members will form five teams, according to the Department of Defense, and include units from the Army, Navy, Air Force, and Marine Corps. The troops include nurses and medical staff who will help administer Pfizer and Moderna’s two-dose vaccines, the agency says.

Slavitt also said the U.S. is using the Defense Production Act to help Pfizer meet its manufacturing goals for its vaccine. The company announced Tuesday that it plans to ship 200 million doses of its coronavirus vaccine to the US by May, earlier than originally forecast in July.

“I think the application of the Defense Production Act is one of the things that will allow Pfizer to achieve its goals,” he said. “They announced an acceleration in their goals of when they can deliver vaccines. And I think our partnership with them is one of those reasons. I’m not going to say that is the entire reason, but it is certainly a critical factor.”

Federal officials are also urging states to administer shots faster. On Monday, Slavitt said some health care providers were regularly withholding vaccines for second shots, which resulted in vaccine appointments being canceled and some Americans being prevented from receiving their first doses.

“We want to make it clear that we understand why healthcare providers did this, but that it doesn’t have to and shouldn’t,” he told reporters Monday, adding that US officials know that deliveries of Covid vaccines to states are frequent were unpredictable during the early rollout in late December.

“We fully understand that this is a direct result of the unpredictability that many states and suppliers have had about the number of doses they would receive,” he said. “That’s one reason we announced last week that the federal government would provide a continuous three-week window for the vaccines to be shipped.”

U.S. officials also hope vaccine supplies will increase after Johnson & Johnson’s Covid-19 vaccine is emergency approved by the Food and Drug Administration, which could happen as early as this month. The FDA scheduled a meeting of its Advisory Committee on Vaccines and Related Biological Products on February 26th to discuss the vaccine. The US could approve the vaccine the next day.

Slavitt said the US would use all options available to expedite the manufacture of J & J’s vaccine.

“As with other vaccines, we have not found that the level of manufacture allows us to have as much vaccine as we think is necessary,” he said.