Will the real “Queen of Atlanta” please stand up?! The natives and residents go hard with everything attached to the city’s name when it comes to Atlanta. Whether it’s sports, entertainment, food, or the culture in general, ATLiens are very prideful. When it comes to having the title “Queen of Atlanta,” the self-proclaimed Queen, Akbar V, feels like the title belongs to her.

Akbar has been loud about being the queen since she stepped on the scene, but today she let off a series of tweets addressing the title and revealed that her upcoming title will be named, you guessed it, “ Queen Of Atlanta.”  “Real s**t I’m dropping #QueenOfAtlanta October 22nd.I’m in my bag. To all the beautiful Queens that’s in Atl that rap, keep going. We all are Queens. It’s more to this s**T than speaking bout who is Queen and who ain’t the Queen. Atlanta has a lot of Queens.”

Akbar wasn’t done yet. She continued tweeting that she felt like her talent was overshadowed and expressed how she needed a team that would help her put 100% into her music instead of drama. In the past, Akbar has had beef with LightSkinKeisha, and most recently, with Alexis Skyy and Khia. However, while tweeting, she did take accountability for her actions.

The conversation seemed to come seemingly after 21 Savage declared on Instagram by calling Latto “Queen of the A.” Ironically, it doesn’t seem like 21’s words bothered Akbar at all. Akbar seems to be turning over a new leaf and said that she didn’t want to tear down women anymore and that she wanted to uplift them. While speaking on uplifting others, she referred to her issue with LightSkinKeisha, detailing that she wishes she would have learned to uplift women when they were going at it and how it broke up their friendship.

While ending her series of tweets, she declared that she would not let the same thing happen between her and Latto. So far, Latto hasn’t responded to Akbar, but we’ll keep you updated if she does. Roommates, are you guys checking for Akbar’s upcoming album?

Want updates directly in your text inbox? Hit us up at 917-722-8057 or https://my.community.com/theshaderoom 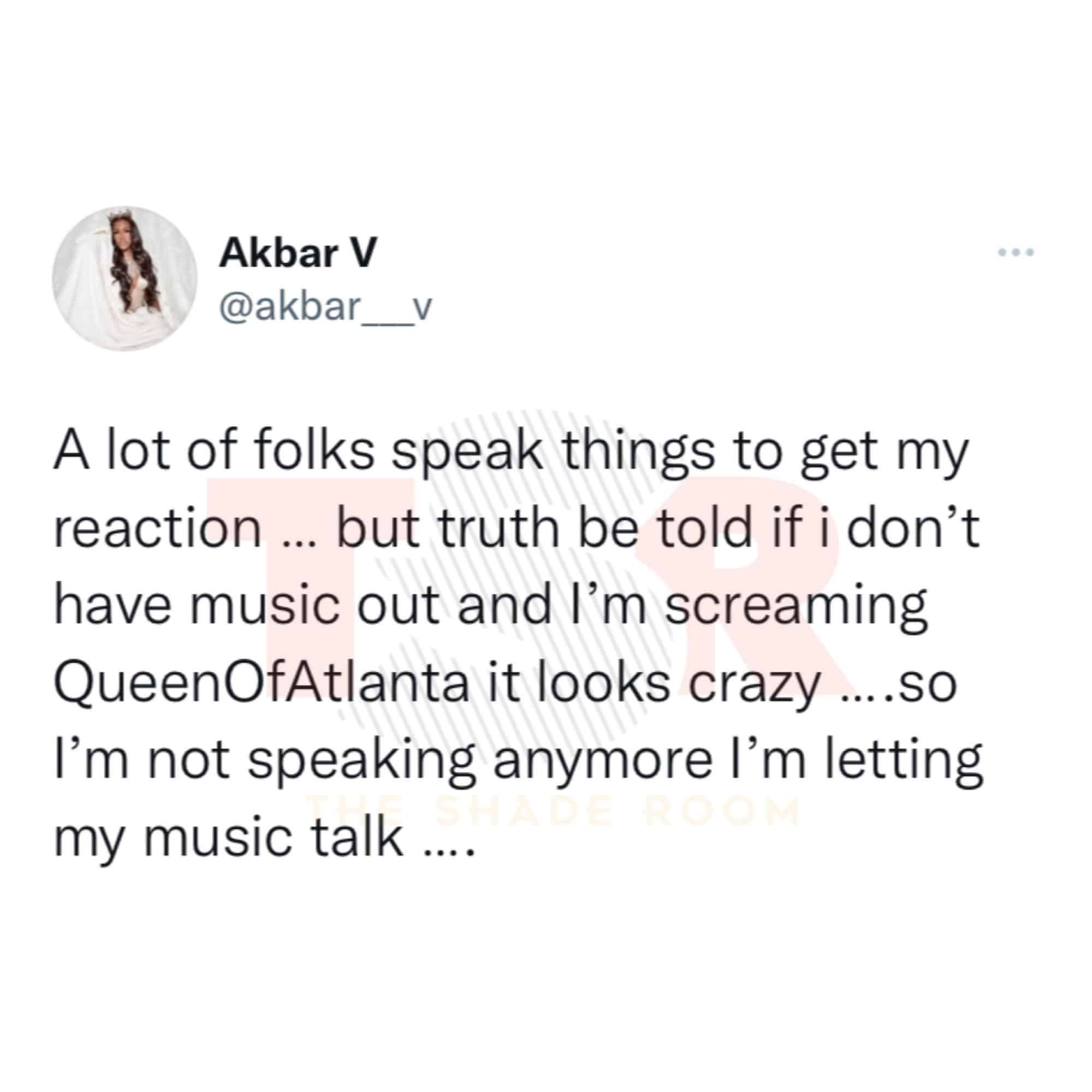 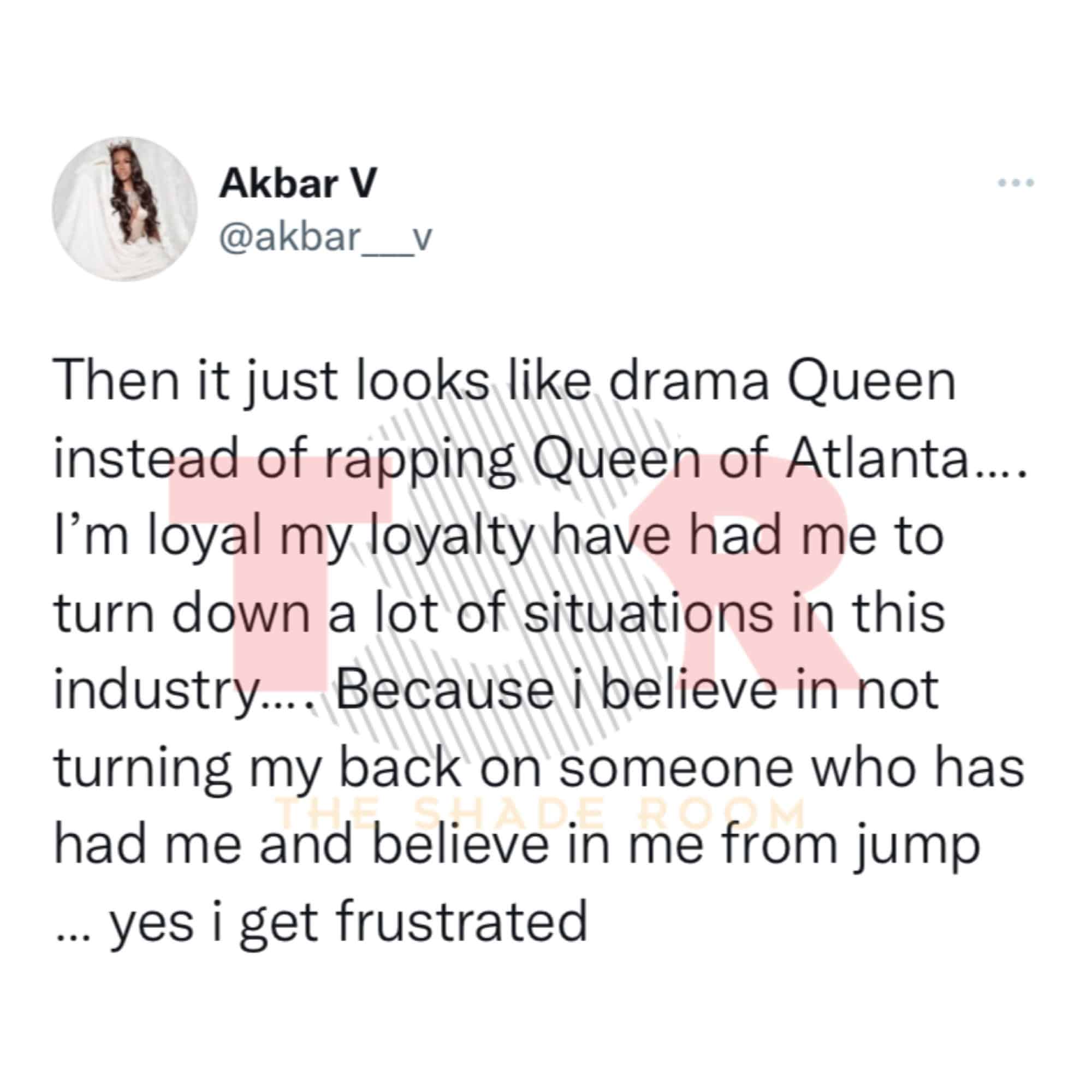 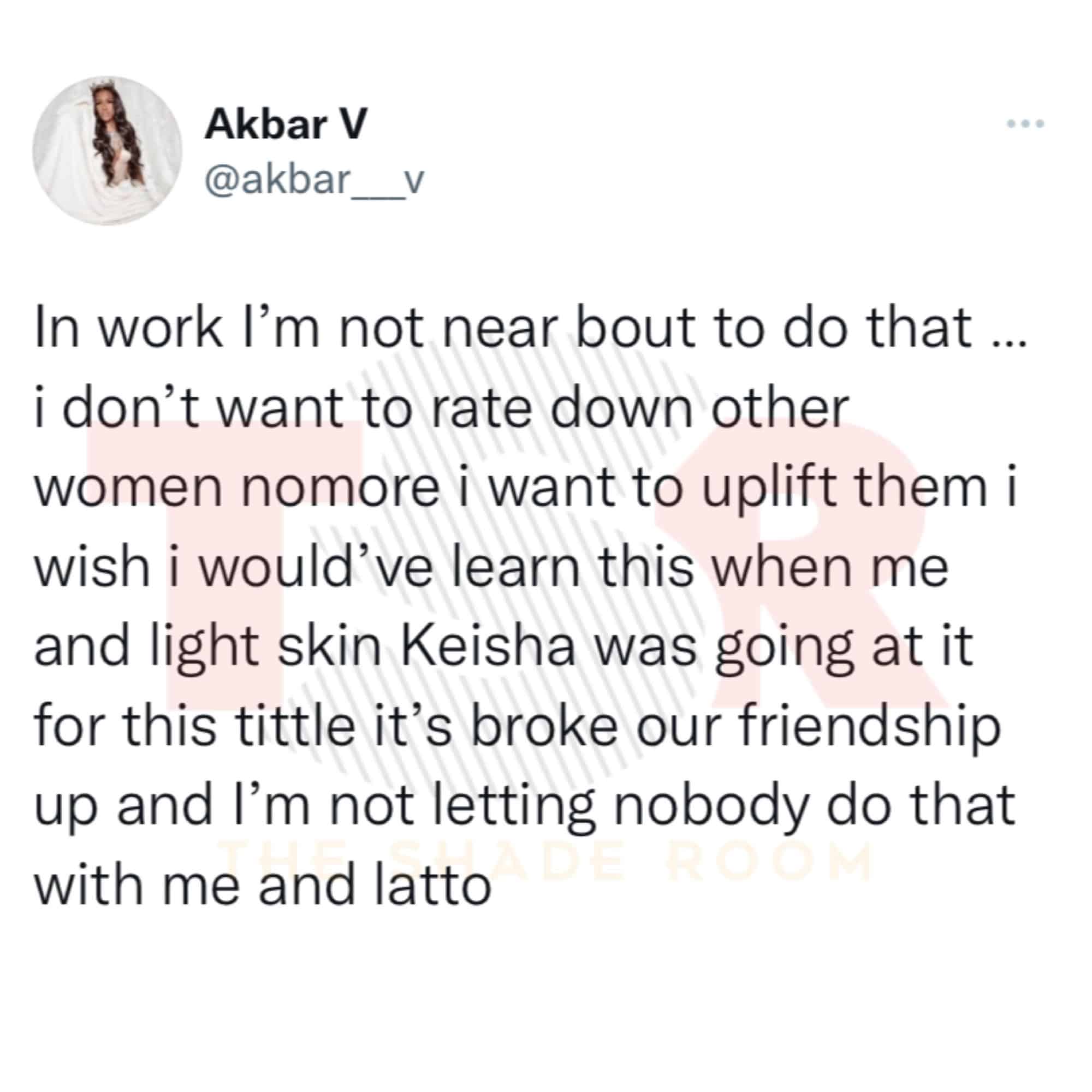 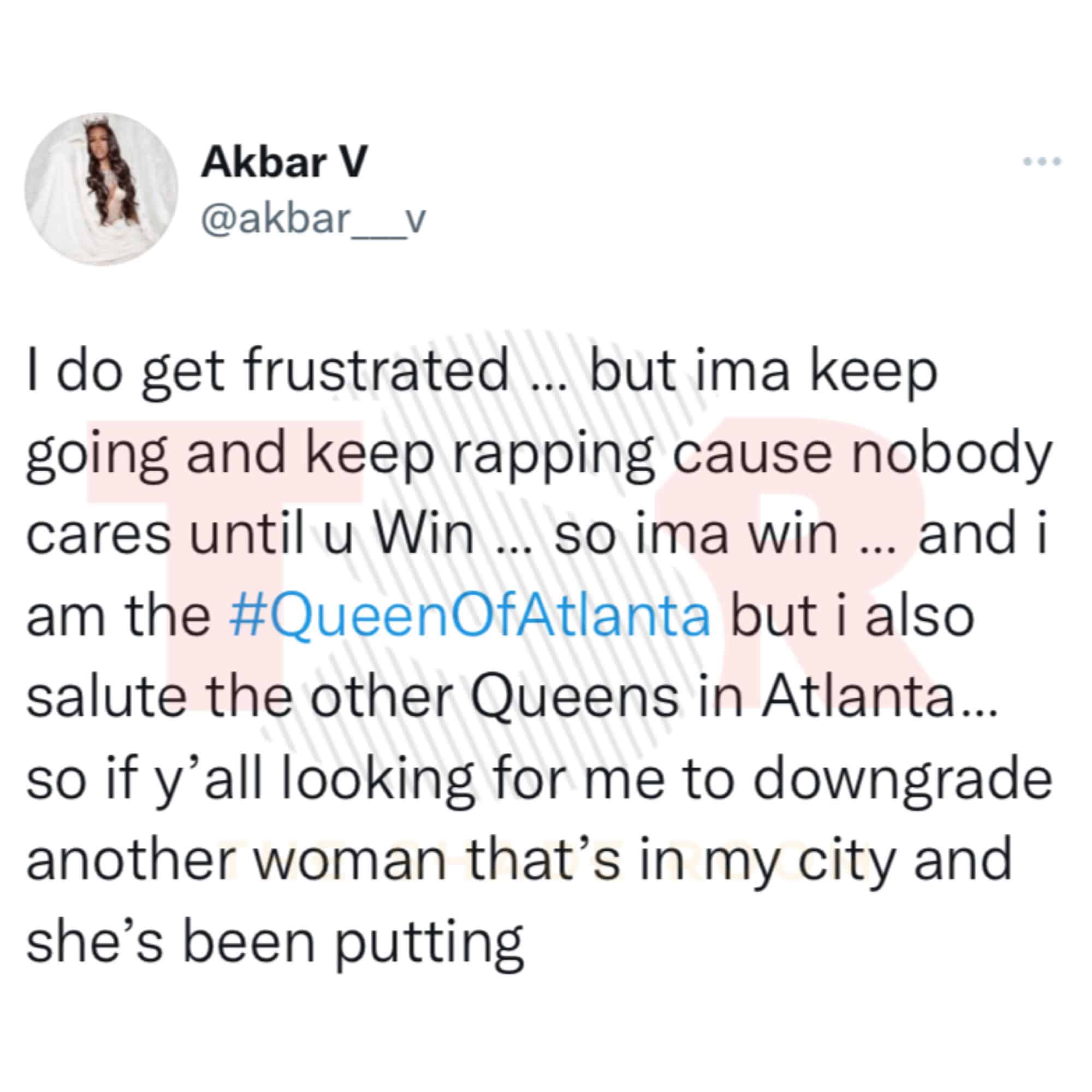 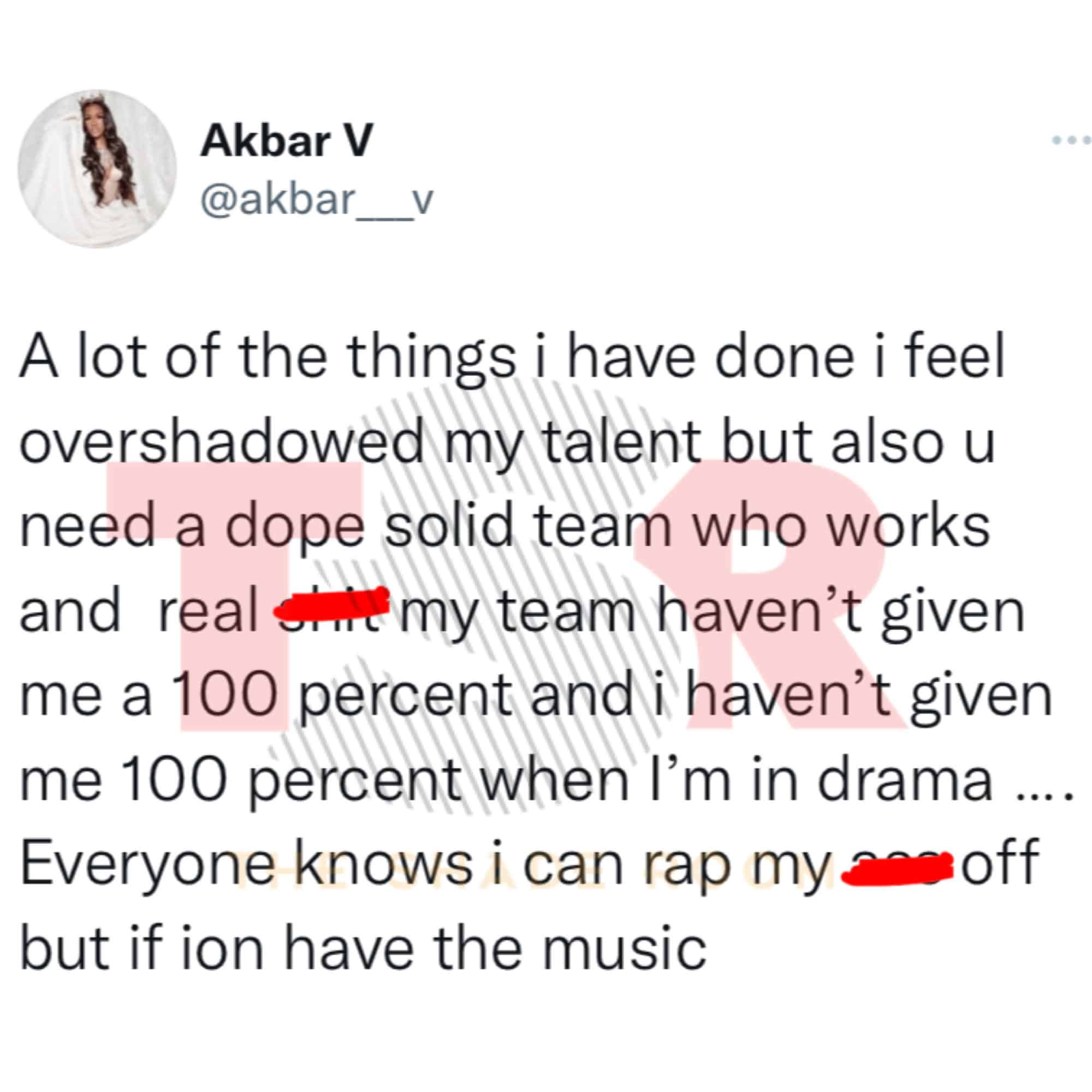